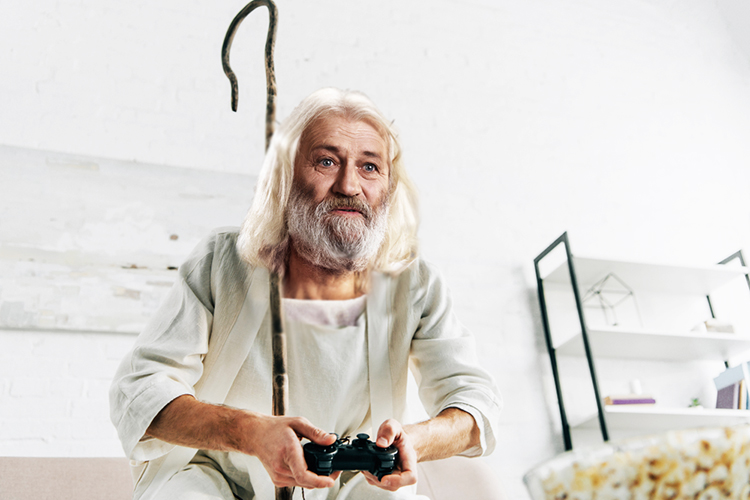 “HA! Would you look at that! I was just thinking things aren’t normally this difficult,” laughed God earlier today, after noticing that the settings on Life On Earth Simulator 2020 were set to ‘extra hard’.

God, an eternity-long fan of the creation game in which you maintain order on the planet of earth by tweaking the environmental and economic stats until everything is running just right, stated that he normally plays on either ‘casual’ or ‘easy’ difficulty, so that he can get more done in the same amount of time.

“You get home from work, it’s been a long day, you just want to play Life On Earth without any real challenge, y’know?” stated God, refuting claims that playing on ‘easy’ is tantamount to cheating.

“It seems that when I updated to the 2020 game, the default was rock hard instead of what I’m used to. Which would explain the whole, y’know, pandemic and the misery and all that. And then along rolled the worst global recession in living memory and I thought woah now, something’s not right here. So I checked the setting and true enough, there it was up on ‘bastard hard’, with the setting for the Brits stuck on ‘even more fucking awkward than usual’. Whoops!”

The discovery has lead to relief for many on Earth, who now hope that God will flick the switch back over to ‘easy for a while; something that the big man isn’t so keen on.

“I’m kind of used to it now, y’know?” explained God, spotting an offshore earthquake about to generate another tsunami in the Pacific but just ‘letting it go’.

“Besides, it’s not as hard as it was in 2016 when I tweaked the audio and visual settings and killed half the entertainment industry now, is it?”