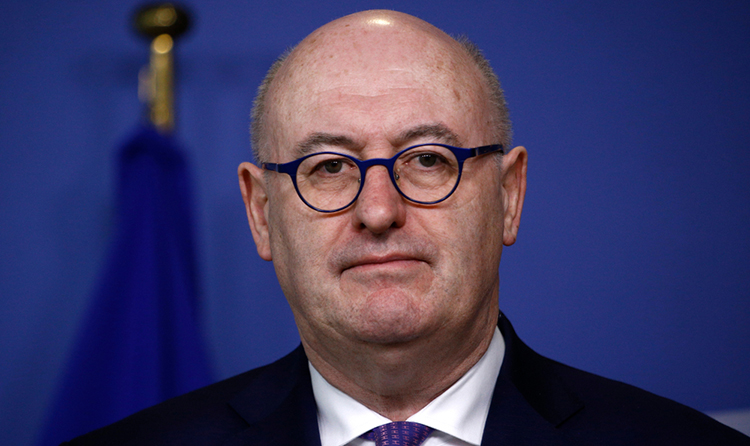 IN AN emotional apology to the people of Ireland over his attendance at a golfing event in Galway last Wednesday which broke all covid-19 lockdown rules, an embarrassed and sheep eyed Phil Hogan pleaded with the Irish public for forgiveness, WWN can report.

“Listen, Big Phil is a big jet-setter now, travelling from country to country,” the inconsolable EU Commissioner said during a rare interview with WWN during an all expenses paid lobster lunch, “as a representative for Ireland in Europe it’s not Big Phil’s responsibility to adhere to social distancing guidelines nor police them. Big Phil is working for Europe now so go fuck yourselves.

Opting for a €350 gold flaked Phoenix Cupcake for dessert, the EU Commissioner for Trade burped openly into this reporters face before continuing to talk about himself in the third person.

“Who’s in charge there now? Martin, is it?” asked the now teary eyed Kilkenny politician, obviously distraught from all the stress from the golfgate fallout and how his actions basically urinated over all the hard work the island has done over the past few months to ward off the biggest pandemic in recent history, “that fool couldn’t run a tap”.

“Fucking apology. Okay, here, try this for size: sorry all you subservient idiots back home are so angry that we had a great time in Galway. It must really be infuriating to know that you plebs will never experience such an elegant and self-indulging event in your miserable low paid lives,” before scrapping his quote.

“Actually, Big Phil is way too important to be personally apologising to the lower classes for having an upper class good time. Go ask Big Phil’s spokesperson for a proper line or two and he’ll sort it out with whatever drivel you want for your crumby news site,” the now emotional 60-year-old concluded.