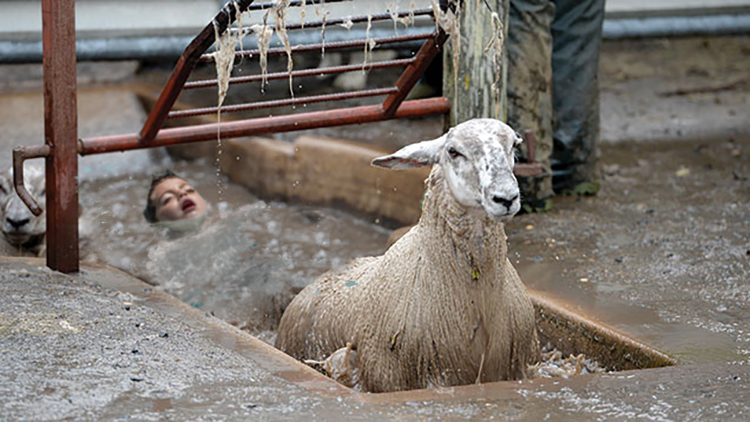 AN INGENIOUS system used by farmers to protect their sheep against infestation from external parasites is to be adopted on a trial basis in rural Ireland in a bid to ward off Covid-19 infection spread among school children.

Sheep dipping troughs are to be installed in over 200 Primary Schools nationwide before September and is expected to be rolled out nationwide if successful, Minister for Education Norma Foley has confirmed.

“All children entering school grounds will be in water containing insecticides and fungicide before entering classes,” Foley said at a demonstration of the new system in Tipperary, as children screamed in horror beside her as a male washer plunged them into a deep pit, “obviously, we need to run some further trials, but we will have this fully operational by the end of August, promise”.

The new in-ground structures, which will be made of concrete, will fit anywhere up to 10 children at a time, however, subjects at today’s demonstration have pointed to a few flaws in its design.

“Some children are smaller than others so we’ve lost a few on the way,” explained sheep dipper, soon-to-be child dipper, David Andrews, who has worked as a sheep farmer for the past twenty years. “The children are complaining about their eyes burning and that the chemicals are getting into their mouths, but once you lob a face mask on them and some goggles, they’ll be grand”.

Meanwhile, it is understood that the government’s new €375 million school reopening fund should just about cover the cost of uniforms and books for a family with three kids.