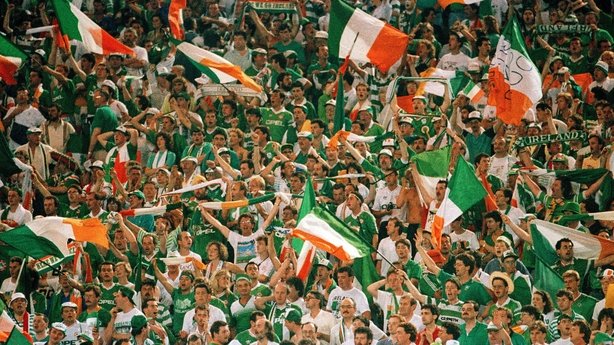 A CRIPPLING bout of emotionally charged Post-Tournament Success Disorder flashbacks have been happily and enthusiastically reported by Ireland’s grizzled veterans of Jackie’s Army after the sad passing of their leader, WWN has learned.

“It was an honour to serve 3 tours; Germany, Italy and the US, under Jackie” shared another vet, who still laughs at the rollicking Jack Charlton, three tournament-star general, gave officials during an abrasive battle against the Mexicans in Orlando.

Jackie’s Army began as a small outfit of special operatives who would traipse around cities throughout Europe before growing in size to become the largest, soundest army in the world and one in which going AWOL was encouraged.

“I was on the front lines man; first to go over the top in Stuttgart. I remember it like it was yesterday,” shared one veteran whose roles in Jackie’s Army included can-reloading technician, round of shots launcher, sing-along starter and tricolour waver.

“I lost some of my best friends over there… and then I bumped into some other Irish lads and I had the best time of my life.”

The roving bands of highly skilled Jackie’s Army draftees won over enemies by following their general’s lead using a combination of giving it a lash, putting them under pressure and then seducing their opposition with intoxicating doses of craic.

“You weren’t there man, you don’t know what it was like,” one craic-shocked veteran recalled fondly, making non-veterans feel like they really missed out on something special.

Elsewhere, Irish people aged between 33 and 25 have be placed on high alert and warned to expect to hear stories about their conception and why they’re called either Jack, Ray, Paul or Fuck Schillaci.