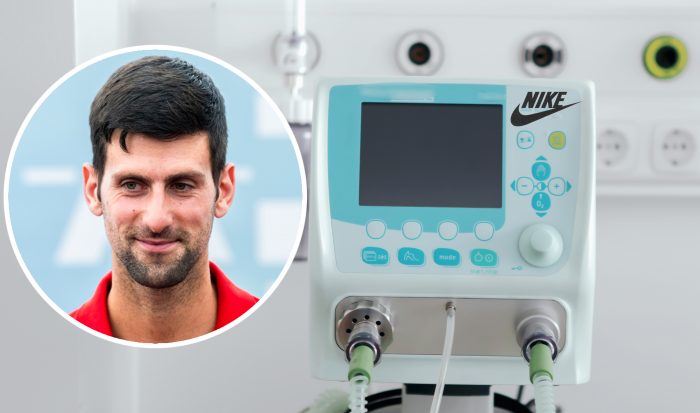 THERE was a moment of panic for world tennis number 1 Novac Djokovic today after being informed that he had tested positive, followed by immediate relief when he learned that it was only for Coronavirus.

Djokovic received his diagnosis midway through his own tennis tournament which drew crowds of thousands and had been criticised for its lack of social distancing or sanitation, and so far the 17-time Grand Slam champion is ‘stumped’ as to where he may have picked up the infection from.

“Pure mystery to me,” wheezed Djokovic, one of four players to be struck down with Covid-19 during the tournament where his wife also fell ill.

However, the potentially deadly respiratory illness may have a positive outcome for Djokovic, as sports giant Nike have already signed him up to be the face of their new line of ventilation equipment.

“Novak is a prominent anti-vaxxer and had recently made statements adamantly arguing against any potential Covid-19 vaccine” said a spokesperson for Nike, unveiling their new ‘Just Don’t Die’ range.

“Then he goes and organises a tennis tournament that invites hordes of people from all over the Balkans region to come and hang out with a bunch of famous tennis players, got to pubs and nightclubs, just have a great time. Then out of fucking nowhere, he gets sick. So we can’t really use him for selling shoes or rackets or sweatbands or anything, but we can use him to sell these sweet ventilators. Well, maybe we can sell sweatbands too. I hear Covid makes you sweat like a mother”.

The deal is the largest sports-based Covid sponsorship to date, but may be trumped as the Premier League continues and pubs in the UK re-open.