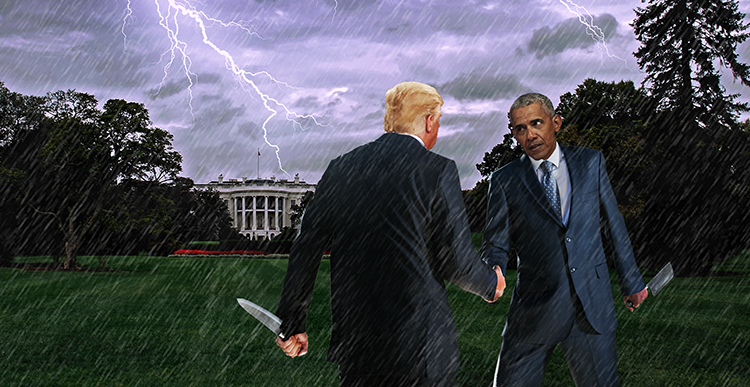 IT’S 3:30AM in Washington DC and former President Barack Obama is still wide awake, pacing his Kalorama home, pausing only to bury his ebony-handled switchblade into a dartboard across the room in a single, powerful movement. With an emotionless face, the 44th president walks over to his target, removes his knife and repeats the action.

Across town in the east wing of the White House, his successor, Donald Trump is also awake, performing a complex series of drills with a pair of stainless-steel butterfly knives, the clack-click of metal the only sound echoing in the halls of the historic building.

Upstairs in each respective bedroom, the men’s wives lie awake. Both know that their husbands aren’t practising.

“There’s only one way this was ever going to end, and that’s in a knife fight to the death under a lightning-streaked sky, blood indistinguishable from blood in the darkness of the unlit White House lawn” said Michelle Obama, pouring herself a 4AM coffee.

“Da, yes” agreed Melania Trump, sitting for her daily ritual of combing her hair in from of a mirror while weeping silently for 13 hours.

The mens’ resolve to sort their differences with a blade-based donnybrook is well known within political circles in DC, following nearly ten years of bitter conflict between them, starting with Trump’s exacerbation of the racist ‘birther’ conspiracy surrounding Obama, and Obama’s open mocking of the then-Apprentice host at the White House correspondents dinner in 2011.

From Russiagate to Peetapegate to Obamagate, the pair has done everything in their power to sully the name of the other, and with political tensions at their worse stage in the decades leading up to the 2020 election, even top-level members of the Secret Service are aware of the brewing blood feud; and they’ve been given strict instructions to let whatever happens, happen.

“President Trump has warned us not to apprehend Mr. Obama should he approach the grounds brandishing a knife. His exact words were ‘let him fucking come'” said Dirk Henderson, chief of staff for the Secret Service.

“Agents are to form a ring around the two guys, and not get involved. Trump was adamant about that. He said if he can’t beat him, so be it. He’s not having the disgrace of having to be saved on his name. President Trump has his failings in this life, but he doesn’t fuck around when it comes to the honourable art of bladed combat”.

Henderson went on to tell Obama followers to not sneer at the current president’s chances; although Obama is the younger and fitter of the two, that ‘only counts for so much’ when the shivs come out.

“Trump is bigger and slower, but he’s got a mean streak in him that counts for so, so much in a knife fight, ” said Henderson, scratching the bottom of an ear that is no longer there.

“Obama’s natural compassion and soy-boy tendencies will be his undoing if he doesn’t finish what he starts, and quickly. Trump isn’t the kind of guy to cut you. He’ll fucking quarter you. You come at him, you make your first shot count because you might not get another”.

Staring out of their windows, as morning breaks and storm clouds gather, 44 and 45 whet their steel and wonder if tonight will be the night that one stands and one falls.

Elsewhere, Pence smiles. Biden wonders where the actress who used to play Miss Ellie on Dallas is, or if she’s even still alive.