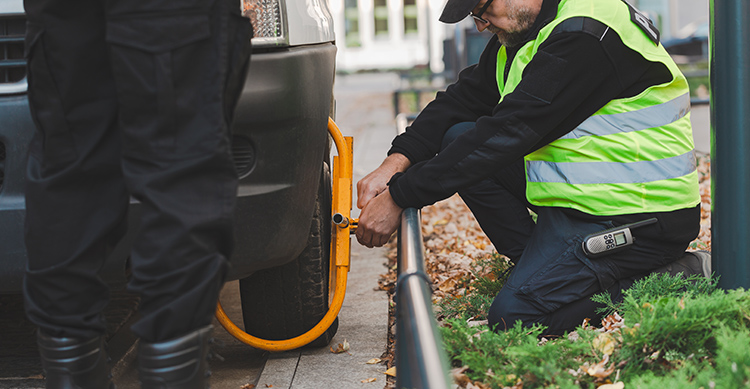 BASHFUL to a fault, Dublin clamper Joseph Culleton will not hear any talk of him being labeled a ‘hero’. 10 years in the job this June, Culleton just sees the vital service as a ‘boring old job’. The humility of the humble clamper knows no limits.

“Honestly, we’re just doing our bit. Actually, I’m kind of embarrassed by all the praise we’re getting, it’s the nurses and doctors who are the real heroes,” confirmed Culleton as he clamped a nurse’s car.

“I know people mean well when they say ‘oh thank God, they’re still clamping cars, I don’t know how the world would function without them’ but I think all that ‘clap for clampers’ and ‘light a candle in your window for clampers’ stuff – while well meaning – isn’t really needed,” added Culleton as he skulked through the streets surrounding a nearby hospital.

“This is a terrible spot for it in fairness ‘cus they’ve got a mortuary in the hospital and the funeral home across the way,” added the eagle eyed clamper, who admitted to having a tear in his eye when reading news reports that children in their thousands, inspired by the selfless work by front line workers, want to become clampers when they’re older.

Clamping activity in Dublin City had been reduced in recent weeks with priority given to keeping bus lanes and pedestrian areas, with the cars of health care workers given special dispensation.

“If you believe that, then I believe this prick here with a ’85 years old, struggle on my feet. Just in pharmacy for wife’s prescription, 2 minutes max’ note on his windshield,” confirmed Culleton, during yet another incident of clamping that reminds him of the good he does in this world.