“I LIKE to lay down on the backseat, peer between the front seats and watch them change the gears,” explained self-confessed cuckdriver Martin Felps, “sometimes I ask them to purposely miss a gear, so it makes that awful grinding sound – it really tingles my wobbly bits”. ‘Cuckdriving’ has been up until now a taboo… Read more » AN IMPORTANT purchase in a marketplace that is sadly rife with dishonesty and individuals seeking to pull a fast one. WWN Motoring is dedicated to helping its readers avoid the pitfalls and common mistakes made by naive buyers of second hand cars. When buying a used car from a private seller you have few legal… Read more » WATERFORD cyclist Eamon O’Brian may adhere to the rules of the road and do his best to ensure a safe journey for himself and his fellow road users, but he isn’t about to win any popularity contests among the greater cycling community any time soon, WWN can report. “Well if it isn’t Mr. ‘I’m too… Read more » UP to 5,000 people who took part in an extensive working-from-home survey have noted that they are now able to get their work done without the distraction of neighbourhood sounds such as alarms or arguments, which they say ‘blend into the background’ after a fairly short period of time. “I barely hear it these days”… Read more » THE long backlog of driving tests has spurred the Department of Transport to instigate a 10-month extension for learner drivers, as well as introducing some new rules and regulations to reflect the post-Covid ‘new normal’ of life on our roads: How do drive with a fully-licensed passenger but still be within government health guidelines With… Read more » “BODY to body, funky to funky,” a haunted Daniel Scanlan whispered as he rocked himself back and forth on a chair in the reception of his new therapist’s office. Scanlan is just one of thousands of Irish people traumatised by a series of Irish Road Safety Authority adverts which generations have found more terrifying than… Read more » 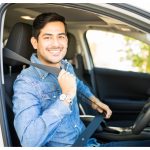 SO YOU’RE in a car; driver, passenger or person in the middle of a car-jacking and you’ve pulled on your seat belt with much haste, causing the seat belt to jam. It’s the nightmare scenario of heightened frustration that drives any reasonable person mad. But did you know there’s an easy fix for such things?… Read more » MOTORISTS attempting to ultilise voice guided GPS systems in their cars have called for immediate help after the roll a new ‘Irish directions’ setting was released, WWN understands. Ringing from locations in laybys of roads that they absolutely didn’t want to be in, miles from their desired destination, motorists have criticised Google and Apple Maps,… Read more » FOLLOWING the debate over Fianna Fáil TD Barry Cowen’s drink driving ban and his holding of a provisional licence for the majority of his adult life, fresh attention is being paid to the fact that over 35,000 Irish drivers are on their 4th-and-counting learner permit. WWN is proud to announce it has partnered with the… Read more »