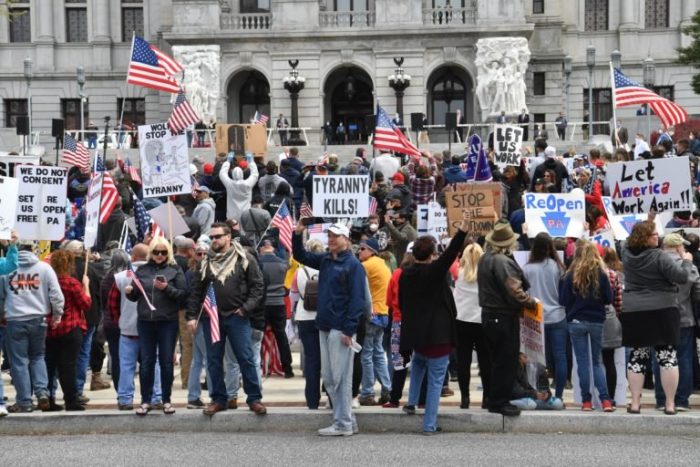 WORRYING scenes continue to play themselves out across America as they have tragically fail to flatten the curve of stupidity currently rife throughout a number of states.

Casually carrying a rocket launcher over their shoulder as is their right as an American under the 2nd amendment, MAGA hat wearing, confederate flag waving Americans continue to struggle with the idea of staying at home to save lives in the fight against Covid-19.

The reluctance to comply with restrictions after over 40,000 Americans have died has perplexed casual America watchers as this is the very same nation that didn’t think it unreasonable to force everyone to take their shoes off at airports before being examined rectally by airport security after one single idiotic individual failed to explode a shoe bomb.

“These same people didn’t seem to mind the government tapping their phones and spying on their every move after 9/11 but staying on the couch to save grandma is suddenly a tyrannical nanny-state step too far?” shared an unsurprised binge watcher of America.

Sobering reports of the devastating economic fallout felt by Americans haven’t been helped by the fact 80% of the benefits of a tax change contained in the $2 trillion Covid-19 relief package will go to those who earn more than $1 million annually, news that has been met with outrage by anti-restriction, Trump-supporting protesters.

“Hey, if Donald Trump says I have to die from starvation or Coronavirus, that’s my right as an American,” shared one protester holding up a sign claiming Covid-19 was a communist, who then vomited at the thought of his economic hardship being alleviated by welfare payments in countries like Europe and New Zealand.

UPDATE: In rare positive news President Trump has temporarily banned all immigration to the US, selflessly protecting foreigners from being exposed to his mishandling of the Covid-19 pandemic.