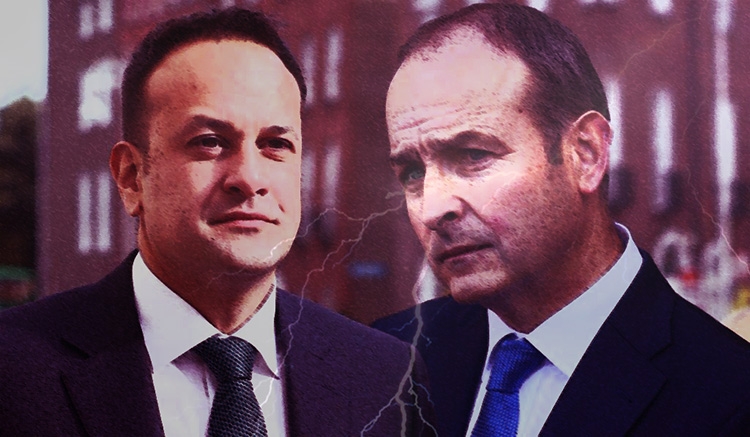 WHERE IT’S coming from remains unclear. Is it thundering from the clouds above? Being piped through the sewers via a speaker system directly from Hell? Or is it just your mind playing tricks on you?

The Irish public has many questions regarding where exactly the satanic flourishes of the iconic ‘Ave Santini’ song from The Omen horror movie is emanating from, but what is clear is Fianna Fáil leader Micheál Martin confirmed his party would be open to going into government with Fine Gael.

“Great, this is all we need, even if we always knew this day was coming” shouted one annoyed Irish voter, fingers in their ears as they competed with the deafening sound of the indelible music from the classic horror movie while dodging crackling lightening strikes.

“Sanguis bibimus. Corpus edimus. Sanguis bibimus. Corpus edimus. Tolle corpus Satani. Ave!” screeched the hellish aural storm beating down upon the ear drums of the nation as images of a rotating Taoiseach arrangement between Leo Varadkar and Micheál Martin violated every last citizens’ imagination, images sure to dominate all future nightmares, from here to eternity.

Unable to explain an unsettling sensation, a vision came upon the Irish public; somewhere, in the corner of dimly lit room, dark shadows graced the faces of two shadowy figures as they whispered “let’s do a deal for power” as they’re booming laughter carried over valleys for miles.

“Honestly, I wouldn’t be bothered by an FF/FG coalition myself only we’d never, ever hear the fucking end of Sinn Féin voters moaning,” concluded another voter, who started whistling before admitting the cataclysmic music was kind of catchy.

Experts have warned we’re only days away from round-the-clock Kill Bill siren noises.