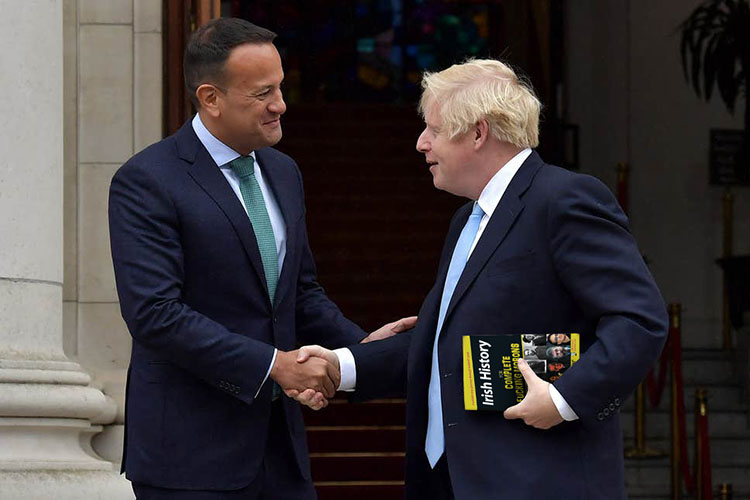 BORIS JOHNSON’S brief visit to Dublin was dominated by his inability to form coherent sentences regarding the border and no deal Brexit, but after Taoiseach Leo Varadkar thoughtfully presented him with a copy of Irish History For Complete Fucking Morons, it is hoped he may reconsider his current lack of any plan.

The introductory book, which has been carefully worded so that it can even be understood by a severely brain damaged cabbage disguised as a visiting world leader, could provide Johnson with the sort of knowledge that brings an end to his open contempt for the concept of preserving peace on the island of Ireland.

Asked about his much heralded ‘plans’ to avert a no-deal and provide an alternative proposal to the backstop Johnson finally showed his hand.

“I’ve made ‘alternative arrangements’ to reality,” Johnson said, before speaking at length about how every British citizen should now pack an emergency ‘grab bag’ stocked with supplies that would help them ignore reality, such as a blind fold, earplugs, a miniature Union Jack flags and a picture of the Queen.

Johnson sadly is only set to be in Dublin for a brief few hours as he has to return to Westminster for his latest defeat in the Commons and fresh resignations of Tory MPs who can even outpace rats fleeing a sinking ship.

In what turned out to be an embarrassing moment for Varadkar, it is believed residents on the island of Ireland had already shipped millions of copies of the popular introduction to Irish history and Britain’s not so innocuous role in it to No. 10 Downing Street with several passages highlighted including ‘basically everything from the dawn of time until today’.