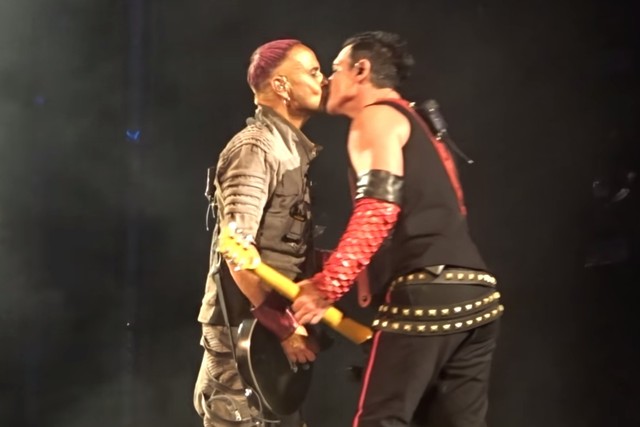 HOPES are fading that any survivors will be found from the wreckage of the airplane carrying rock group Rammstein, which was shot out of the air by Ukrainian separatists as the band flew over Russian and Ukrainian airspace on their ongoing tour.

The heavy metal legends were last in the area for a Moscow concert in June, notable for an incident where guitarists Paul Landers and Richard Kruspe kissed onstage in a jibe at Russia’s strict anti-LGBT laws, a joke that was taken in good humour by the Kremlin.

Those laughs have turned to tears as Krupse, Landers and fellow group members Til Lindemann, Oliver Riedel, Christoph Schneider and Christian Lorenz are believed to have perished along with the rest of the crew and passengers of flight HZD1995, which lost contact with the air authorities yesterday.

“We shot that down,” said a masked Ukrainian person in a video posted on the Russia Today TV station minutes after the crash.

“Yup. That’s us, that’s what we do. Shoot down airliners. Shit happens, what can we say”.

Meanwhile, a spokesperson for Vladimir Putin has expressed a deep sadness at the tragedy.

“It’s such a terrible accident, that has claimed the lives of these young men who challenged the views of our government” said the spokesperson, dabbing away tears.

“Of course, we took all that as playful satire, the kind we can’t get enough of here in Moscow. So imagine our surprise when we learned that those friggin’ Ukrainians had been at it again. What are they like, at all? You couldn’t be up to them. Anyways, Rammstein In Peace”.

Sky News are already on the scene of the crash, with Colin Brazier having a look through their luggage to see if there’s any T-shirts in his size.