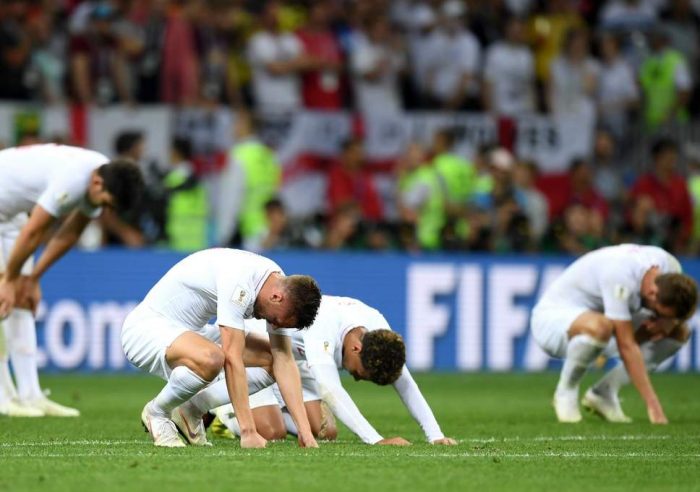 The Croatian team, comprised of many men who had to flee their homes as war broke out in the Balkans when they were children, turning them into refugees with football an escape from the violence are an inspiration to the football watching world.

A story of triumph, courage, sacrifice and perseverance that could never fail to register on an emotional level with people who know the transformative power of the world’s most beloved sport. A population of just over 4 million people, it is an incredible achievement that will inspire football mad children the world over. More important than that for Irish people watching, they knocked the fucking English out.

Last night saw Croatia advance to the final of the World Cup after a heroic performance, allowing England fans to focus full time on supporting and celebrating the surefire success that is Brexit.

Kieran Trippier’s free kick gave England the perfect start after Croatia were slow out of the blocks due in small part to the fact their manager, Roger Federer, was running late after coming straight from losing the quarter finals at Wimbledon.

Here in Ireland a large number of people have been given the day off by their bosses in order to allow them to fully catch up on the 13,456 It’s Not Coming Home related memes currently flooding their WhatsApp conversations. Sadly, waistcoat sale are down 900% on yesterday’s numbers.

“We take no joy in this,” Ireland confirmed, barely keeping a straight face. Scenes of wild celebrations in Dublin continued throughout the night as shops sold out of Croatia jerseys and the Lord Mayor confirming Croatia’s victory parade is set for O’Connell St on Monday.

However, the joke may be on Ireland as if current trends continue our football team is scheduled to play well again sometime in the 28th century.

A bright start from England saw them create a number of half chances as it looked like Croatia, as predicted by pundits, ‘might not have the legs’ after going to extra time in their two previous knock out games.The location of the Croatian players’ legs in the first half remain a mystery but FIFA have promised a full investigation.

The game had everything for a neutral; a stunning free kick strike, shots hitting the post, last ditch slide tackles, a player getting hit very hard in the testicles with the ball and England ultimately losing.

The vast majority of hardcore Anybody But England fans made sure to listen to RTÉ’s commentary right up until the full time whistle at extra time before immediately switching over to ITV to luxuriate in the tears of the defeated.

Perisic drew the Croatians levels with a sublimely struck improvised shot with momentum swinging in his team’s direction. England from here on in clung on desperately to the draw after wave after wave of Croatian attacks, managing to force the game into extra time.

As England clearly tired John Stone’s went from having a header cleared off the line to falling asleep, he was so exhausted, which can be the only explanation for why Mario Manzukic was able to get clear and fire home the winner.

The English tabloids have been uncharacteristically humble and appreciative of their team’s efforts and ultimate exit from a tournament in which they overperformed. In a rare show of support, the tabloids have vowed not to hack Gareth Southgate’s phone and force him out of the job until he loses his next match.

Now that England’s tournament has come to an end, neutrals can finally admit that Three Lions (Football’s Coming Home) is a bit of a tune.

Elsewhere FIFA president Gianni Infantino will disqualify Croatia from Sunday’s final, replacing them with Brazil, citing the fact that having Croatia in the final hurts FIFA’s brand value as they aren’t as marketable on an international level and profits could suffer.