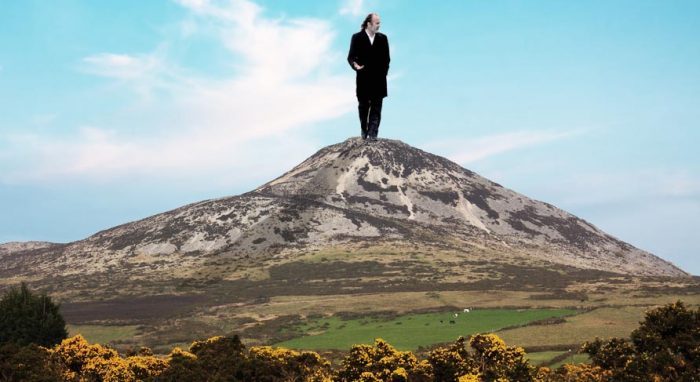 COURAGEOUS No Side martyr John Waters has been erected on the side of the iconic Sugarloaf mountain by a group of John Waters supporters, after the columnist was unfairly asked questions in an interview by broadcaster Eamon Dunphy.

The 100ft tall Waters structure is a cry from the Sugarloaf to leave Mr. Waters alone, after his sentences regarding the 8th Amendment were continually interrupted by things called ‘questions’, leaving Waters with no other options than to shout expletives and storm out of the room.

“It took a gang of about 30 of us to do it, but it’s disgusting what they did to John, they made him answer questions, can you believe it?” one man said, recalling the shocking and frankly disturbing exchange on Eamon Dunphy’s podcast The Stand.

“Imagine going into a situation and not been given a choice. Like, all John wanted to do was talk in a meandering fashion for 40 minutes, spouting shite without interruption or fact checking, and he was denied that choice, I’d like to see how these Yes women would cope with such a denial and restriction,” added the man, who was keen to point out that the supply line of tea and sandwiches delivered to him and his giant John Waters building colleagues was maintained by good God-fearing women.

The No Side, who have been at pains to say they have been given no outlet to voice their argument in media circles, confirmed their anger at how Waters was asked to appear on a well-regarded, high profile podcast and then was sneakily blindsided with a nefarious tactic known as ‘journalism’.

“We’re being silenced,” explained 57 separate No Side campaigners while making appearances on the most read, watched and listened to news outlets in Ireland.

An imposing site on the Sugarloaf, John Waters was also fitted with twin waterfalls which were positioned at both his eyes, making for a striking visual metaphor for how one of Ireland’s most well known columnists was betrayed.