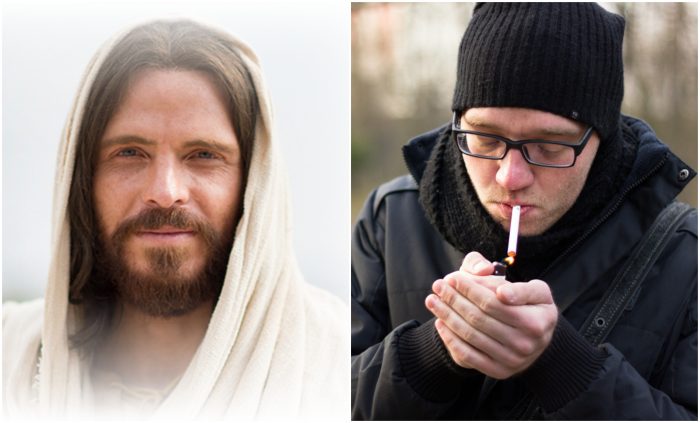 THE CATHOLIC community has come out in force today to question one local man’s commitment to lent as it draws to a close after it was revealed he only lasted the three days off the fags.

Waterford native Ciaran Cullihan (29) sought to replicate the sacrifice of Jesus Christ’s journey into the desert for 40 days by giving up cigarettes for the same number of days, but information gathered by WWN today reveals he failed spectacularly, leading many to conclude Cullihan isn’t all that respectful of everything Christ endured in death for his followers.

“The lad was flogged and crucified on a fucking cross and this cunt Ciaran tapped out after 3 days of trying not to smoke… seriously, just not smoking. How hard could it be compared to that,” remarked one religious peer of Cullihan’s who took issue with the plummer’s ‘piss poor lent attempt’.

While trying to spiritually engage with the remarkable suffering Our Saviour put Himself through for humanity’s collective sins, Cullihan was of the opinion that the magnitude of what Christ endured could spur the Irish man on to complete something almost as impressive; giving up the fags.

“The whole time I was trying to connect with what Jesus went through for me, you and everyone else, I was also thinking ‘fuck I could do with a cigarette’. There was only going to be one winner,” Cullihan, who can barely look anyone in the eye his lent effort was that bad, explained to WWN.

Cullihan had initially tried to deny his cigarette smoking when confronted, however, WWN had pictorial evidence of several smoking incidents submitted to a local Lent Breakers Hotline which took place just three days after the start of lent.

“Ah fuck sake Ciaran. Only three days? D’ya have any idea what the big man went through, and that’s without me mentioning the whipping,” remarked a disappointed Pope Francis upon hearing of Cullihan’s dismal failure.