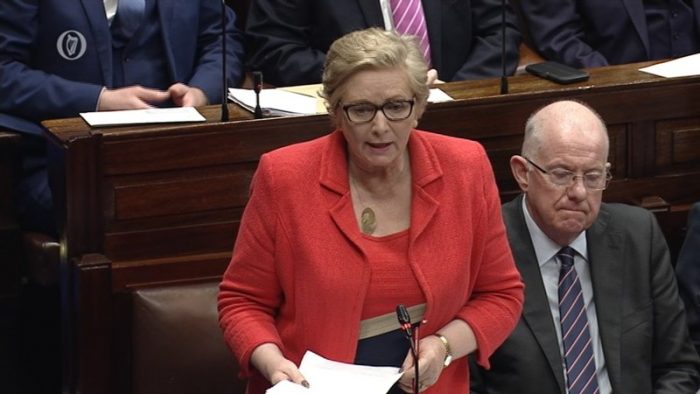 SPEAKING IN the Dáil in order to respond to questions around her knowledge and possible part in former Commissioner Noirin O’Sullivan’s decision to instruct a legal team to question whistleblower Sergeant Maurice McCabe’s motives for wanting gardaí corruption to be stamped out, the Tánaiste Frances Fitzgerald provided an exhaustive timeline of what she knew and when.

Tánaiste Fitzgerald has now added to and corrected the Dáil record with a supplementary timeline informing the Oireachtas of when she began to fear she might lose her job for this poor recollection of key information.

A timeline unfolds. Fitzgerald admitted to be ‘fairly fucking shitting it now altogether’ when the news emerged days ago that her Department had knowledge of O’Sullivan’s intentions a full year before previously claimed.

Pressure builds. Fitzgerald, using the aid of a power point presentation drew the attention of the Oireachtas to an email sent immediately after an email she could no longer deny knowledge of had become public knowledge.

Pointing to a picture taken just hours ago, Fitzgerald showed how she was crouched down in the hallway of Leinster House contemplating her future employment status, after seeing on Twitter that the Taoiseach declared his ‘full support’ for her while posing beside an avocado that was doing yoga in the Phoenix Park at 6am.

The end point. Fitzgerald shared a screengrab of a Google search she made which asked ‘how big of a payoff and pension do I get if I’m sacked’ and was relieved to see the generous money she could ride off into the sunset with if it came to it.