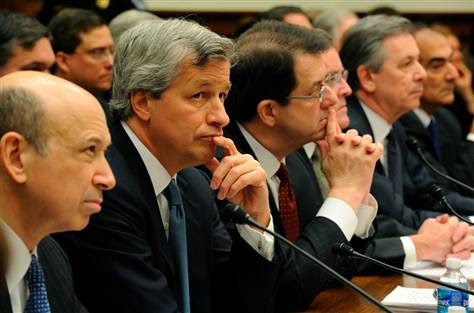 REPRESENTATIVES for the world’s main banking cartels are said to be “pretty happy” with the way this whole war on ISIS thing is turning out, admitting that they were getting worried about the lack of business at the start of the 21st century.

Speaking at a meeting in an undisclosed location in the US, members of the four horsemen of global banking (Bank of America, JP Morgan Chase, Citigroup and Wells Fargo) agreed they couldn’t have planned the whole thing better themselves, and were looking forward to lending trillions of dollars for weaponry and intelligence programs over the next few years.

“Religion is always a good one,” a senior executive of JP Morgan pointed out, referring to World War II’s anti-Semitic theme. “We could be looking at trillions of dollars in individual military loans to both sides of the war, which is great for us as we’re the ones printing it.”

The banking cartels, who also happen to own four of the world’s major oil companies, went on to thank their people on the frontline, politicians, who worked perilously hard in coordinating and misrepresenting recent conflicts.

“How can we forget our customer service departments across the world for marketing such a beautiful and hopefully fruitful world war,” a representative of Citigroup said, raising a €5,000 glass of champagne. “Without team leaders like Barack Obama, David Cameron and our friends in Saudi Arabia, there would be none of this; so let us toast to them for their valiant efforts. May they continue to represent our product as best they can.”

Following a brief ceremony involving a child sacrifice, several senior bank officials smeared themselves in blood before singing an unknown anthem in a satanic tongue.