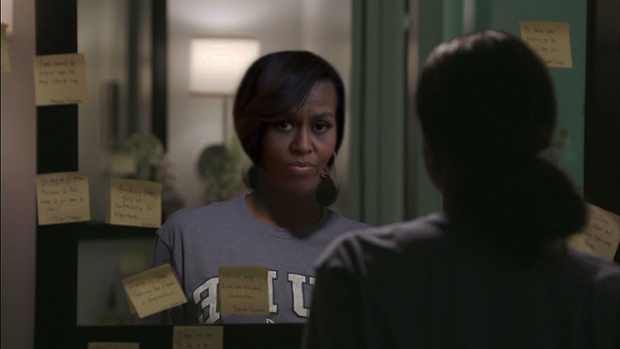 THE AMERICAN first lady has been desperately practising her best “concerned face” in front of the mirror this morning before delivering her husband’s weekly presidential address to condemn last month’s abduction of Nigerian girls.

Mrs. Obama, a lawyer and writer, is expected to look as sincere as she possibly can for the duration of the speech, which is set to last a whole twenty minutes.

“I’ve been practising my sympathetic face since Wednesday,” revealed the 50-year-old, who spoke to WWN exclusively from the White House. “Look at me now. Am I doing it right? I always feel I’m overdoing it. Does it look put on? Christ! I fucking hate this shit.”

“Being the first black president’s wife has its advantages and disadvantages I suppose.” she explained. “Barack was briefed to make a big deal out of this whole African village kidnapping thing and because they’re black women my script writers have to give my two cents on it. My hair is a mess.”

An estimated 50,000 women are sold into slavery in Africa every year, however last week’s abduction of 200 schoolgirls was picked up by the mainstream media and sold throughout the world as hard news.

“There’s probably something else going on in the background somewhere.” said the first lady. “Barack’s people just love decoy news. Is this dress too printy? Floral print is in right now. I seen it on E.”

Earlier this week, she tweeted a picture of herself in the White House holding a sign with the message “#BringBackOurGirls”.

“I think I kinda overdone the sympo face on that one.” she concluded.