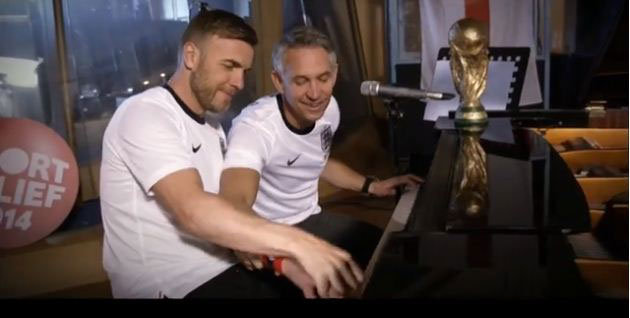 There has been a considerable amount of confusion and anger amongst the footballing community today as England’s 2014 World Cup song came under fresh criticism.

While England boss Roy Hodgson will officially unveil his world cup squad on Monday, fresh criticism has been leveled at the official anthem for the English national team.

Greatest Day, a rehash of a previous Take That hit, has made no mention of the fact England will at best go out in a blaze of humiliation at the quarter-final stages of football’s greatest tournament.

“It’s a bit dishonest really, isn’t it?” David Clarke, England supporter probed, “If I start listening to that song on repeat and watch the video, I might like, brainwash myself and start telling everyone I know we’re gonna win the world cup.”

A petition asking for the song to be rewritten with a less uplifting feel to it has gained over 100,000 signatures in England.

“We’re Not That Great Really, Are We?” Is an alternative song penned by David Batty, David Seamen, Rob Green, Gareth Southgate and Stuart Pearce which is slowly gaining support from some realistic England fans.

The official anthem’s writer Gary Barlow, has been quick to apologise, but many feel more should be done.

“I understand this is a mistake on my part and even with the video we just put in the bit about winning the world cup before and not the bit about being shit at most of them so for that I am sorry,” an emotional Barlow shared on his Facebook page.

“If I had known this song would lead to blind, even idiotic optimism I would never have to put pen to paper, note to song,” he added.

If a number of petition currently being pushed by fans are heeded all future England songs will have to nominate a player as a scapegoat in advance of the tournament and not during it as it can prove distracting for players.