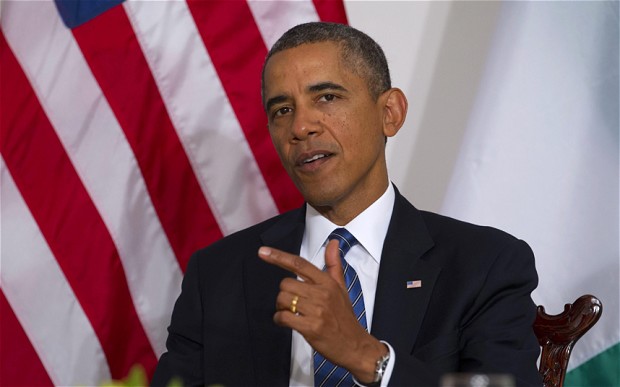 While on a state visit to the Philippines President Of America, Barack Obama hinted at possible future sanctions on Russia as tensions between the two superpowers shift horrifyingly from lukewarm to tepid.

“While using the analogy of various incremental changes in temperatures may not be entirely edifying, it is better than facing the reality,” shared leading political commentator Dwight G. Holden, “the reality being that there is nothing we can do to stop Russia.”

In an attempt to force the hand of Vladimir Putin as he continues to bravely flirt with the idea of repatriating Ukraine to the Motherland, Obama has imposed further sanctions on Russia and some of Putin’s closest allies.

The President’s words were perceived by hard line Republicans as the clearest indication yet that Obama is in fact a Kenyan born homosexual Muslim communist woman.

Marginal figures on the right have helpfully told the President the best course of action is to ‘annihilate the fucking shit’ out of Russia, noting that America has more than enough nuclear warheads.

Individuals from both sides of the political divide who are unhappy with the President’s latest comments may be several additional recommendations, including ‘sending men and women who are not related to me to fight in a war’, ‘see if other countries will fight first’, ‘rewatch cold war documentaries for ideas’, ‘activate Snowden’s mind control chip’, ‘learn the Russian word for stop’ and ‘Jesus’.

When asked by a journalist what would the President do if the latest sanctions proved to be fruitless, Obama stayed silent before asking his nearby security team to add the journalist to ‘his list’.