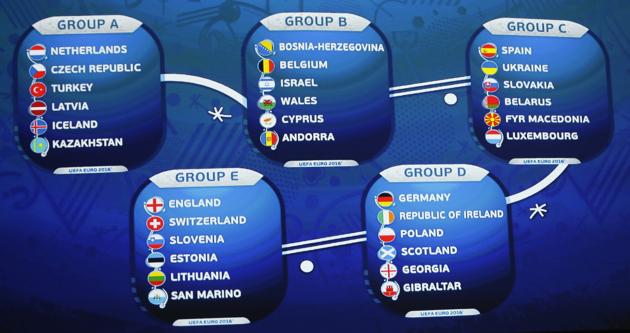 The draw for the qualification stage of Euro 2016 took place yesterday and gave many football fans the chance to speculate wildly on the fortunes of their respective countries.

Ireland found themselves in a tough position with Germany, Poland, Scotland, Georgia and Gibraltar taking their place alongside the boys in green in group D.

While some Irish fans remain blindly optimistic about our chances, other more down to earth and depressingly realistic fans expressed caution and resignation when it came to Martin O’Neill’s men.

“Ah the Germans will ride us senseless,” was the view of Irish fan Gav Quinn, “I was thinking of buying tickets before the draw, but at this stage, think I’ll plan with 2048 in mind,” Quinn solemnly concluded.

The FAI have strongly denied claims that they asked the UEFA to ‘do the draw again’ as they felt it couldn’t have gone any worse.

“I’m not a pessimist, but our arses are going to redraw after the Germans are finished with us and sure the Polish, the Polish? They’ve about 200,000 scouts over here who know everything about us – we haven’t a hope,” was the view of another normally optimistic fan John Delaney.

Most fans have pinpointed the 2048 iteration of the European Football Championships as the most likely chance we have of qualifying, pointing to the fact that a healthy influx of several generations of more talented immigrants will enhance our chances of qualifying for what will then be a 150 team-strong tournament.

Irish fans frustration was further enhanced by the fact that England’s group represented the footballing equivalent of Usain Bolt trying to outrun a 90 year-old wheelchair bound man who has been dead for several years.