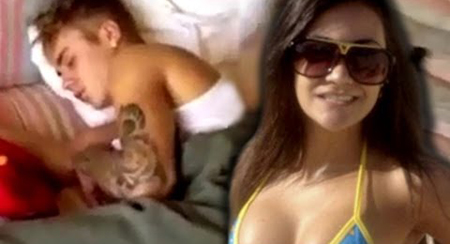 A 27-year-old woman who slept with Justin Bieber claimed today that he has his very own penis.

Model Tati Neves said she noticed the organ after a party at his villa in Rio de Janeiro last week.

The Brazilian native claimed the 19-year-old male showed her his penis while trying to engage in the human act of sexual intercourse, and said the 4-5 inch lump of flesh looked exactly like all the other penises she had seen over her 18 years of sexual relationships with men.

“We took off all our clothes and got into bed.” she told WWN in an exclusive interview earlier today. “It took us quite some time to find it. He begged me to sing some Michael Jackson songs to help him along. Once I got to the chorus of Billy Jean we were able to locate the penis.

“It was like a turtle head at first. Hiding. But we eventually teased it out in the end.”

The single mother of twelve made headlines when a video she filmed of Justin sleeping in bed went viral.

“I didn’t intend for the video of one of the most famous and sought-after male singers in the world to be made available to the general public.” she said. “Neither did I intend to sell every bit of my Justin Bieber story to hundreds of newspapers for money. That was the last thing on my mind when I jumped into bed with him and his penis.”

“All I wanted was a quiet, loving relationship that would have been kept out of the public eye forever and ever.” she added, after receiving her $2,000 cheque from this reporter.

Until now, it has been widely speculated by the media if the young star had any sexual organs.