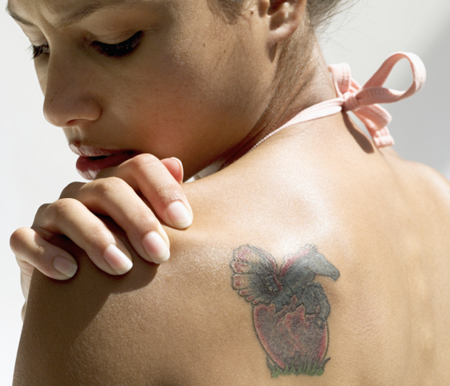 Ally Loughrey caused a stir on her Facebook page after sharing a picture of her new tattoo.

The artistic composition, Loughrey stressed, had a personal meaning and significance which some friends speculated may have had something to do with that prick Gavin breaking up with her two months ago.

Loughrey posted a picture on Facebook to display her tattoo with the words ‘new chapter, new tattoo’.

Friends rushed to comment and congratulate Loughrey on the new addition to her skin with one friend remarking “omg you went with the rihanna style one, amazing!” while another noted that “it looks a bit like mine except you’ve got a…are they wings, yeah? Class”.

Ms. Loughrey made sure to provide several photos of her tattoo from different angles so as to avoid any misconceptions regarding the tattoo.

The tattoo’s design and unique look was decided upon by Loughrey when she typed a personal message into google translate and clicked on the ‘Spanish’ option.

Taking her grammatically incorrect Spanish message to the tattoo parlour along with a picture of someone elses’ tattoo she had seen on instagram. Loughrey had all the elements in place to make a unique statement about her place in the world.

Local tattoo artist Trevor Vaughan patiently spent 20 minutes completing the tattoo and even pretended to listen to her as she explained her life story in detail.

“I think some eejits mistake this place for a fucking therapy session, I should charge extra” Vaughan told WWN.

Loughrey remained tight lipped as to the tattoo’s true meaning even after a friend, fluent in spanish, posted “you know ‘perder’ can also mean ‘to leak’, right?”