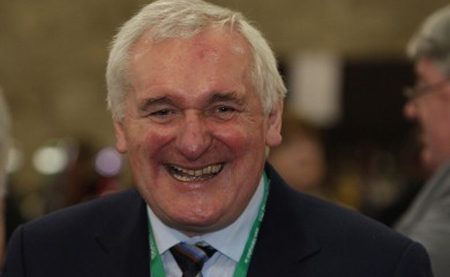 IRELAND’S CELTIC-TIGER Taoiseach Bertie Ahern has today made a courageous stand against the prejudice that stigmatises happiness, by coming out in public and talking openly about the condition.

Mr. Ahern was praised by fellow politicians for his bravery in dealing with his own personal battle with happiness, and was said to be an inspiration to those who currently battle with the disease.

Speaking from his modest five bedroom home in Dublin, the ex-Taoiseach told WWN how easy it has been for him since leaving office.

“Sometimes I don’t feel like getting out of bed at all in the mornings,” he said smiling. “I’m usually too hungover and never play a round of golf till after one anyway.”

The former head of state, who was forced to take an annual €150,000 pension upon leaving office, burst into tears of laughter during the interview, before apologising to this reporter.

“Sorry, I just remembered I have to fly to the US tomorrow morning and give a twenty minute speech on leadership in some stupid University.” he explained. “Then I have to collect my ten thousand dollar cheque and meet my daughter Celia in Rome the next day.”

“You’d be wrecked travelling the world all the time.”

Mr. Ahern, then went into detail about how fun life is at the moment, stating that his timing on leaving office was ‘impeccable’.

“If I left it any later I would have ended up like that Patsy, Cowen.” he added. “That poor auld cunt isn’t even welcome in his own parish church. Me and the lads always do the theme tune from the ‘fall-guy’ when we see him.”

“The last I heard, he has to dress up in drag to go play bingo in Burr.

“All I ever get is some drunken eejit now and again giving me guff. It’s great!”

The former Fianna Fail leader was attacked by an intoxicated man with crutches on Saturday night.

“I don’t know what got into him. One minute I was laughing about the state of the economy and the next I got a slap of a crutch.”

Mr. Ahern is expected to release a book about his battle with happiness early next year, called ‘LOLing Through The Naughties’.