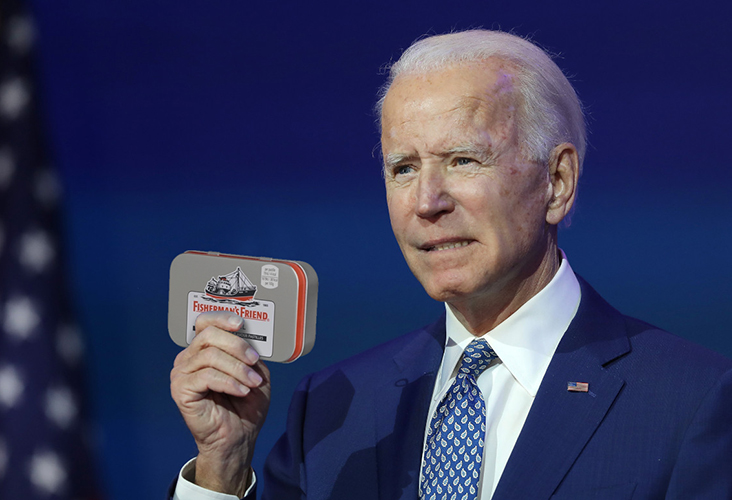 US President Joe Biden has boxed off an hour this afternoon to sit down by himself in the Oval Office and loudly suck an entire pound of hard candies as he contemplates his next move when it comes to Russia’s continuing aggression against Ukraine.

Biden, who every day sets a new record for being the oldest sitting president of the United States, has always kept a supply of Werther’s Originals and cinnamon lozenges to hand for ‘when thinking needs to be done’, but sources close to the White House have suggested that the current conflict with Putin has Biden ‘on three packs a day’.

“He’s onto the hard stuff; Rhubarb & Custard candies, one after the other. If he gets two that are stuck together, he won’t even separate them, just sucks ’em both at once,” said an insider today, who ‘hasn’t seen the president this tense since the season finale of NCIS’.

“As he navigates the potentially deadly conflict with Russia, he has moved on to Extra Strength Fisherman’s Friend lozenges. You can’t even get those in a candy store for Christ’s sake – you gotta go to a pharmacy to pick them up. You can rest assured, there’s a whole bunch of Ukrainian folks that are praying these candies give the president the brain power to muscle through this impasse with the Russians”.

While his counterpart Putin has remained calm and collected throughout the entire saga, insiders have revealed that a frustrated Biden frequently emerges from the Oval Office to yell at ‘whipper snapper’ staff to keep that racket down, as he’s ‘trying to do some goddamn thinking in here’.