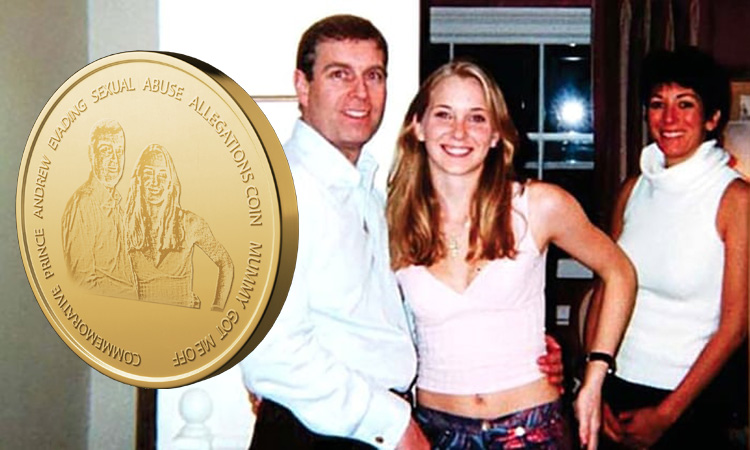 TO commemorate the UK Metropolitan Police ending its investigation into the alleged sexual assault of Virginia Giuffre by British Royal Prince Andrew, the Royal Mint of England has announced a new range of collectable coins to celebrate the fact, WWN reports.

The £3 coin features the original image of Prince Andrew beside his accuser with his hand on her hip taken in what is believed to be Ghislaine Maxwell’s home in London when Giuffre was just 17-years-old at the time.

In keeping with Royal tradition, the denomination of the memorial coin is a ‘three bob coin’ – typically used to mark significant moments of Royal family crime evasion.

“We’ve minted 50,000 of these limited-edition coins to mark yet another escape from justice for a member of the royal family,” said President of The Royal Mint Advisory Committee. “What a fitting tribute, considering a financial settlement between Ms Giuffre and Epstein basically nullified the civil case against the Queen’s favourite son”.

The new coin will mark no further action by the UK Police into claims Virginia Giuffre was trafficked by Epstein, Andrew’s former friend, to have sex with Andrew in London.

“Well, we’re hardly going to arrest a man whose mother’s face appears on all our money,” a spokesperson for the Metropolitan Police concluded.