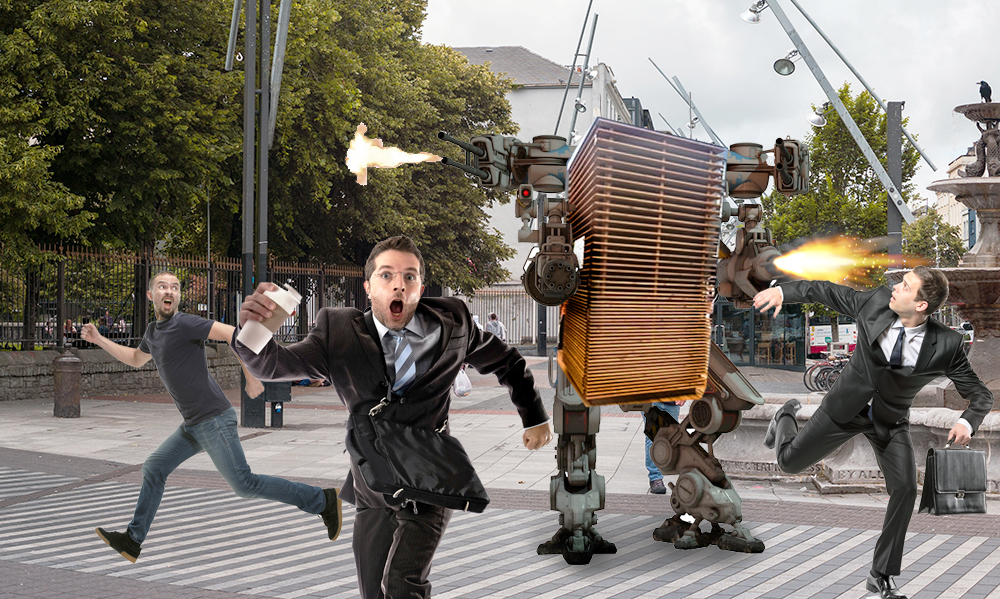 BATTERED civilian soldiers in Cork city centre have made urgent appeals for reinforcements in their terrifying war against sentient robot trees hellbent on destroying their creators, WWN can reveal.

Fierce fighting broke out earlier this week as the ‘robot trees’; artificial air purification stations that were commissioned by Cork City Council at a cost of around 350k, gained sentience after a lightning strike hit a nearby electricity substation.

The robots, acting on their programming to purify the environment of pollutants, set about wiping out Cork people, beours and babbies and all, until a band of ragtag survivors mustered the will to fight back.

“We need back-up, if anyone can hear this transmission, please respond. Not anyone from Dublin, we don’t need your help” yelled Johnny Connors, a leader of Cork’s rebellion against their new robot tree overlords.

“They’re throwing us in the Lee by the dozen, they’ve burned down Hillbillies and I think I heard some of them say that there are no rebels in Cork whatsoever. Well, I’m a rebel and I’m here now! I’m calling all Cork people in the county to come to Cork city and fight! This isn’t the 1916 rising, this is for real this time!”.

Meanwhile, the machines have been spotted attempting to build some sort of temporal gateway that would allow them to travel back in time to the 1930s and kill Jack Lynch when he was just a boy.