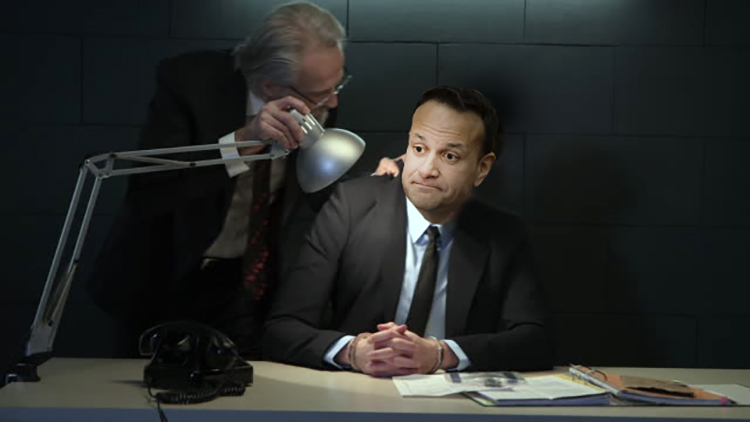 MORE shocking than the news that a current Tánaiste has presented himself to gardaí for questioning in relation to his conduct in office is the almost near media silence on the matter.

WWN, Ireland’s fearless leading news outlet seeks to address this with an exclusive leak of the transcript of Tánaiste Leo Varadkar’s interview with gardaí:

Garda 1: Let the tape show Mr Varadkar has opened his suit jacket to reveal a number of confidential files, one of which is marked ‘The Third Secret of Fatima’.

LV: Look, this GP lad wasn’t even my friend. But he wanted to be my mate worse than Micheál Martin. Wow, these interrogation rooms aren’t like the movies at all, nothing like The Wire. You’ve seen The Wire, right?

LV: Aw, what are ye like? Nevermind the leaks, you should be arrested. A cop who hasn’t watched The Wire?

Garda 2: Tánaiste, if we can for a minute, just address the issue at hand.

LV: Mary Lou being in the RA?

LV: Have you checked lately? You know you can lock that lot up now without a jury. Special criminal court, just throw away the key. Job done. Pay rise. You’re welcome.

Garda 2: This isn’t doing you any favours.

LV: My personal solicitor, Fine Gael party solicitor, legal counsel within my department, my mate who’s a solicitor, half my party colleagues who are solicitors or barristers – they bet me I couldn’t work in more than five movie quotes. They’ll absolutely crack when they read this transcript.

Garda 1: This is ridiculous…

LV: “What we have hear is a failure to communicate” …’Cool Hand Leo’

Garda 1: Let the tape show Mr Varadkar has tried now for a 3rd time to ‘Basic Instinct’ us. And let the record reflect this doesn’t strictly count as another movie quote.

LV: How long have we been at this now?

Garda 2: No more than two minutes.

LV: Grand, that should be enough time to make it look like you were properly investigating this. Right, Varadkar out. Peace!

Garda 1: Mr Varadkar? Tánaiste! Yes, you’ve presented yourself here voluntarily, but know that if there is any wrong doing here we will get to the bottom of it.

LV: Ha, nice try lads. Y’know I was part of the governments that cut resources to the point where you’ve less manpower than a wet pub during a stage 5 lockdown. What have ya, one Nokia 3310 and a Sega Megadrive between five districts? I’m shaking in my boots.

Garda 2: Well, we were knocked down the vaccine priority list…

LV: Eh, why don’t you focus on the real criminals, the welfare cheats!

Garda 1: Let the tape show, the interviewee has attempted to Moonwalk out of the room while putting on sunglasses.