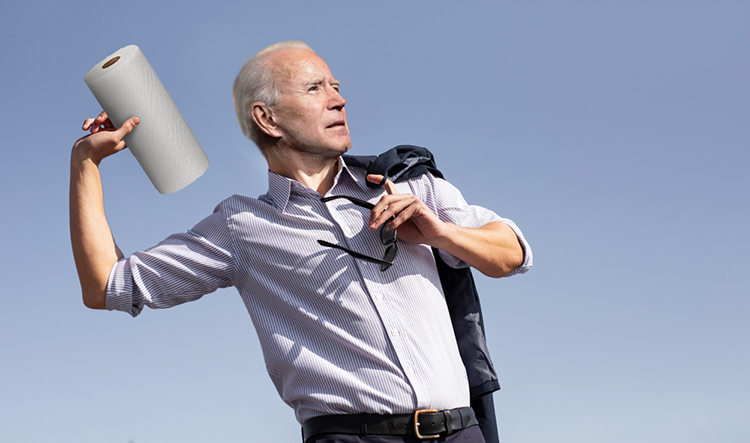 HAVING failed to sign an executive order rowing back the Trump administration’s approach to disaster-hit areas, US President Joe Biden is to travel to storm-hit Houston to hand out packs of kitchen rolls, snacks, and MAGA hats.

The state of Texas is currently experiencing the worst winter storms in history not helped by interrupted electricity and heat services, with thousands caught out by temperatures plummeting to record lows and up to 20 people perishing in the cold; something that the President isn’t certain a few rolls of Bounty is going to fix.

“We need to battle extreme climate emergencies at the source, not the end; we need to combat climate change by reducing our carbon emissions and investing heavily in renewable energy. But first I have to go hold a rally for myself like a total dumbnut in front of a bunch of people who have lost their homes,” sighed Biden, setting off for Texas.

“I didn’t know the other guy had actually written this monkey business into actual law, I just thought it was some doofus stuff he did off the top of his head. When I get back, this’ll be the first thing I sort out, but until then, wish me luck, I’m off to see if I can get a thousand people who are freezing their butts off to chant ‘USA’ in an aircraft hangar”.

While President Biden traveled to the stricken area, scientists at the White House continued work on the Biden Hologram project, which is hoped to cut down on the 78-year-old’s traveling to dangerous areas and help America ‘get the most out of Joe while we have him’.