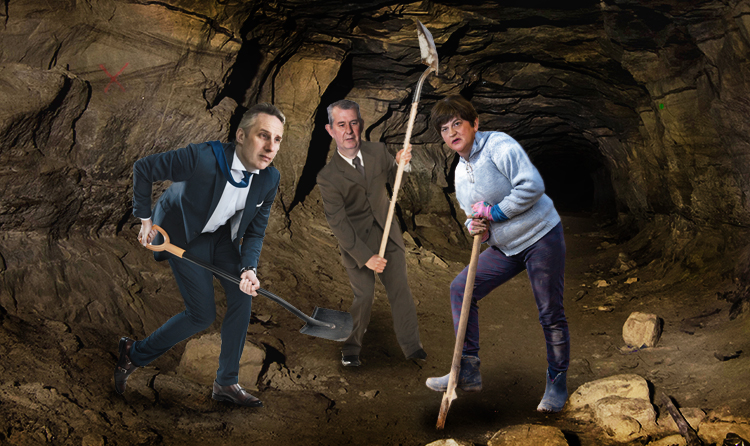 TAKING the mere rumour of the ludicrous proposal for an underground tunnel linking Northern Ireland to Scotland as the official ‘green light’, the DUP has spent the night hacking away at the earth in a bid to progress a subterranean tunnel.

“No this is a great idea, what better way to keep a Union together than by building a tunnel,” a sweating Arlene Foster said as her pickaxe descended into rough stone, seemingly forgetting all the use building a tunnel between London and Paris did for keeping Britain in the EU.

“Plus goods arriving via a tunnel rather than ferry would somehow magically avoid Brexit related movement of goods issues,” Foster added, now consulting her compass and a map of Narnia in a bid to ensure they were digging in right direction.

The DUP should be able to accelerate work on the tunnel by borrowing explosives from Loyalist friends who have been stocking up ever since the Brexit the DUP supported continues to cause well flagged issues.

“Wait, we’re digging to Scotland? I thought we were burying the abortion laws,” a confused Sammy Wilson added.

Britain’s PM Boris Johnson denied coming up with the underground tunnel idea in a panic when he realised he hadn’t got the DUP anything for Valentine’s Day, however, doubts remain over the ability of Johnson, famous for spending £53 million on failing to build a bridge over the Thames, to get the tunnel done.

Elsewhere, the public was left to contemplate what shady, unforgivable things the Tory party was trying to keep the public’s attention away from with the announcement of the tunnel while in Scotland people were left wondering what they’d done in a previous life to warrant being connected to Larne.