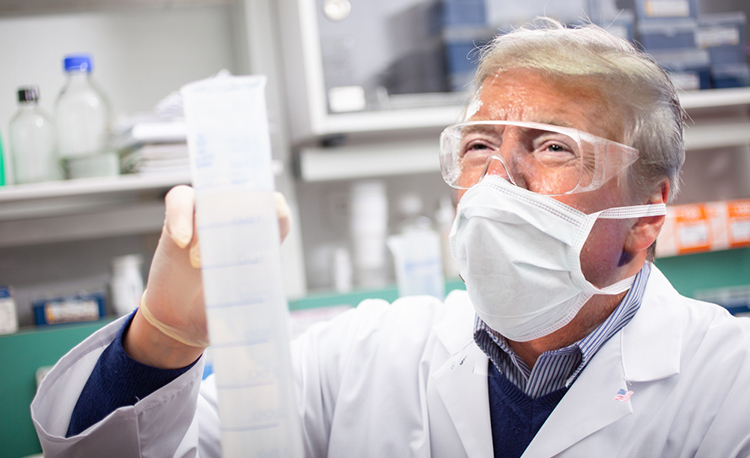 DISPLAYING a level of compassionate selflessness not seen since the days of Jesus Christ, outgoing US president Donald Trump has pulled another all-nighter in his White House lab, working on yet another Covid-19 busting vaccine.

“Bless him, he hasn’t left that lab in months,” confirmed one aide unaware Trump was simply trying to look busy by mixing Coke, Sprite, Fanta and Dr Pepper into one measuring jug from his My First Chemistry Set toy set.

Trump, the sole creator of both the Pfizer and Moderna vaccines, according to himself, have yielded encouraging results thus far and it is believed he’s thought of little else but finding a cure, even forgetting to dye his hair so lost to singular focus.

“He said he couldn’t in good conscience risk a single American citizen’s life which is why he tests the vaccines on himself and only himself,” added the aide, watching Trump actually inject his sons Eric and Donald Jr.

“Oh sit still you whiny little shit, it is so not worse than the bleach injections, you’re just being a wimp this one is 104% effective,” Trump barked as he pinned down his son turned lab rat Eric who’s skin began mutating shortly after receiving his latest jab.

Such has been Trump’s singular focus aides say he remains unaware that he has lost the recent election.

“Like he’d care anyway, his only thoughts are for the American public never himself. God damn it, that guy won’t leave that lab until he has everyone cured… nice putt Mr President,” confirmed one aide greenside at one of Trump’s golf courses.