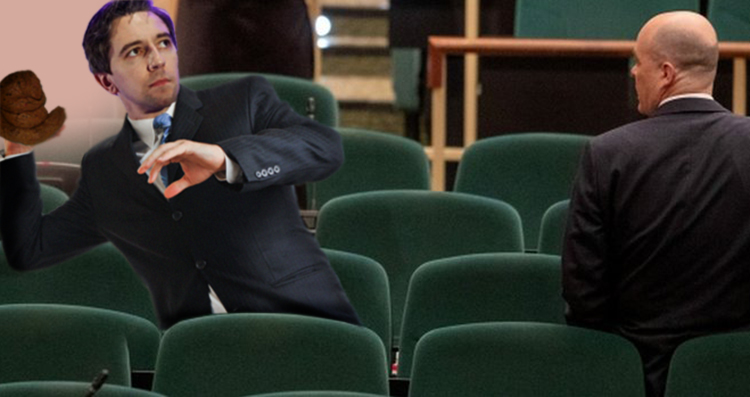 DIGGING in with Convention Centre staff while armed with a mop and a bucket, Ceann Comhairle Seán Ó Fearghaíl is surveying the inexcusable damage caused by the government after it spent the entirety of last night’s motion of no confidence debate in Leo Varadkar flinging its arse effluent at Sinn Féin.

“Oh for feck sake, some of this will stain the Dáil for years to come,” muttered Ó Fearghaíl, who had to stop proceedings after the government insisted on flinging shit at Sinn Féin as the Taosieach observed that the Tánaiste leaking confidential documents was somehow all Sinn Féin’s fault.

Deciding not to engage with any direct points made by opposition TDs speaking on the issue of Varadkar’s confidential leaks, the government where seen on Dáil CCTV removing adult nappies and placing its content into sling shots they have sneaked past security.

“How about you hold this to account,” shouted one government TD as she threw her faeces at Sinn Féin leader Mary Lou McDonald moments after the opposition leader said the Tánaiste should be held accountable for his actions.

“We must not slip into the divisive politics like we see in America, the politics of name calling,” offered several sitting government ministers, “but if those terrorist bastards crooks with no integrity Sinn Féin IRA had their way, with their big moldy dole heads on them, that’s where we’d be. I’m just thankful this government we can keep some civility”.