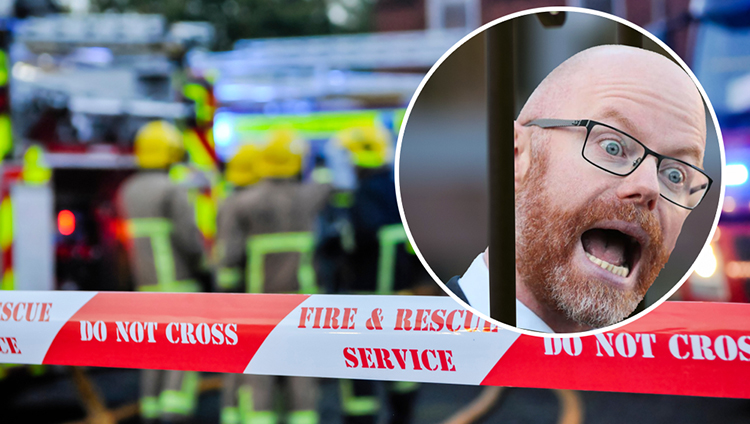 FRESH from the Taoiseach revealing he only learned about the recent, probably fairly inconsequential collapse of the country’s contact tracing system via an Irish Times article, today has brought yet another embarrassing incident for the hapless three-party government.

“Eh, sorry lads,” shared a sheepish Minister for Health Stephen Donnelly to firemen arriving at the scene of the Fianna Fáil TD’s head wedged in between the railings outside government buildings.

“I’ll be honest, I’m struggling to explain my thinking here,” he added of his current predicament, however, it could serve as a comment on 90% of things he’s said and done since taking office including his most recent claim that he too was utterly clueless as to the contact tracing system issues.

As Dublin firefighters went to work greasing up Donnelly’s neck and head, critics of the government’s Covid-19 resourcing reacted.

“Oooooh, our bad. We must have spent the last several months sending our stark and grave warnings about how the test and trace system needed more resourcing and was teetering on the edge to a completely different government, silly us,” confirmed the nation’s healthcare workers, specialists, GPs and members of the public.

Elsewhere, never one to just shut up and do his job, Tánaiste Leo Varadkar one upped the Taoiseach’s ignorance by revealing he only learned about the contact tracing debacle via a video on Tik Tok this morning.

“You’d think the baldness, aerodynamic surface would make this easier, but he’s wedged t’fuck,” remarked exhausted firefighters, not realising Donnelly was holding onto the railing for dear life.

“Ah that’s a shame, looks like I’m stuck here forever more. Maybe Micheál should get Simon Harris back as minister for health. Ugh, I’m raging honestly, if only I could get out there and continue to be the world-beating health minister Ireland needs right now”.