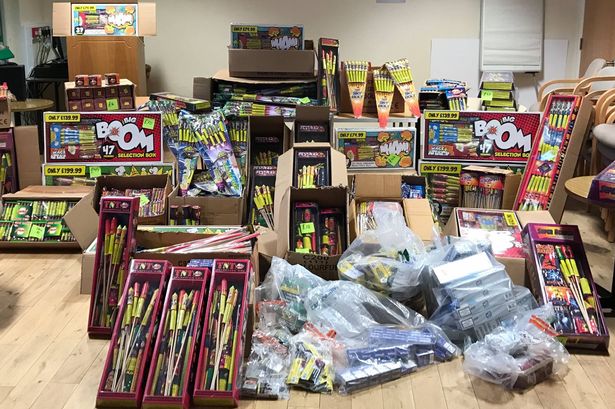 ALTHOUGH the blasts echoing around the hills and houses of Ireland every night from mid-August to early November would suggest otherwise, the sale, possession and use of fireworks remains illegal in the Emerald Isle, with nobody but a few learned scholars of Halloween history able to explain why.

Some say the colourful explosives were taken off the market under the assumption that the IRA were working round the clock emptying the contents of repeaters and airbombs into drums to make bombs. A claim backed up by what was described as ‘a Black Panther of a Black Cat; a 200lb bomb exploded outside a checkpoint on the border in 1983, it’s red, green and crackly yellow burst luckily causing no injuries or casualties.

However, the truth lies closer to the supernatural, and stretches much further back than recent history.

“Halloween traces its roots all the way back to the ancient Gaelic festival of Samhain, and as such all relevant trademarks associated with Halloween are owned and monitored by these ancients, and it isn’t wise to ignore them” warned noted historian Finbar B. Finnerton, opening up about the centuries-old dispute between the true High Kings of Ireland and a Chinese firework-producing Emperor.

“The ‘wee folk’ get a cut out of everything Halloween related that passes from shop to consumer. Every knock-off Harley Quinn and Joker costume you see a couple wearing on a boozy night out, a neon green Borat onesie, well, it’s the fairies and the little lads that get money from it. If you buy a plastic pumpkin that lights up when you walk past it, they get paid. On everything. Everything except fireworks”.

“The firework mad Chinese lads back in the day just were not willing to play ball with the lads, and wouldn’t pay the Halloween levy. As such, that was that; it was a curse to even bring fireworks into the country, and any retailer who did try to sneak them in faced a thousand nights of jaggy thorns in his bed every time he lay down”.

Although nobody from the Chinese dynasty side was on hand for comment, the leprechaun prince that lives in the lone bush in the field across from WWN towers was more than happy to offer his take on it.

“We make 98% of our gold in October alone, from the rights to Halloween, we leverage it pretty hard. But those Chinese bastards thought they can just muscle in on that? Fuck no” said the wee lad, although we have taken editorial license with some 400 of his more outdated and offensive comments.

“We reached somewhat of a settlement 50 years or so ago that allowed the sale of Funsnaps, just because we think they’re good craic. Especially if you throw them at aul ones. You should see them jump! But if the Chinese want to bring in the hard stuff, the big guns, the bam-bam-bam stuff; gold in the pot lads. We’ll need gold in the pot”.

Those who flout the rules set forth by the leprechauns by smuggling fireworks across the border should be made aware that the little folk are taking note of every rocket that goes into the sky.

“Enjoy the spectacle while you can lads”, our man warned.