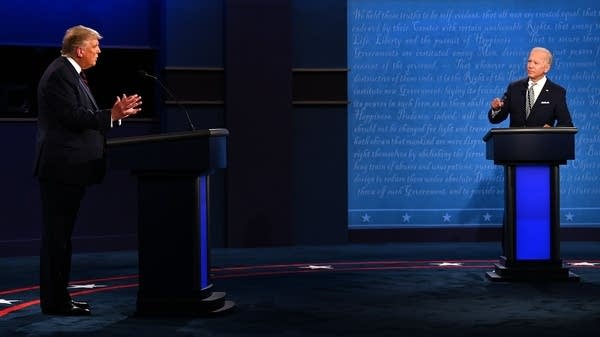 A CHAOTIC head to head in which, as ever, the sane portion of the American populus was the real loser. See our recap below for how the bitter debate between president Donald Trump and former vice-president Joe Biden played out:

Waiting in the wings of the debate stage, Biden could be seen necking a tub of performance enhancing drugs, while Trump was pictured reading an upside down copy of ‘Racist Dog Whistling For Pros’.

Sources close to both camps suggested Biden will try to come across as dignified and trustworthy, while Trump isn’t above telling the American people to go fuck themselves.

The debate lasted 90 minutes representing the longest time Trump has gone without access to Twitter in nearly four years.

Asked how they think the debate will go, experts expect it to resemble a particularly insufferable Christmas dinner with your two senile grandfathers.

Tonight’s debate was moderated by Chris Wallace, who visibly aged beyond recognition during proceedings as he tried and failed to get Trump to shut up for two second.

60 seconds in folks and the onstage fact checking machine has committed suicide.

A debate dominated by Trump’s incessant interruptions, the only time the president fell silent was when he was asked to condemn white supremacy.

Many observers will point to Trump refusing to denounce white supremacy as the standout moment, a refusal which will be of comfort to all ordinary decent white hooded wearing, cross burning Americans everywhere.

Those who predicted this debate would be a dignified and respectful affair have been labeled dumber than a glass hammer.

For many Trump supporters this is their first glimpse of Biden in the flesh after four years of watching nothing but Fox News. At 18 foot tall, red eyes and horns, wearing an ‘I Am Antifa’ t-shirt, he’s a terrifying nightmarish sight.

Finishing up a 12 minute personal attack on Biden, Trump accuses him of everything from assassinating Kennedy to writing the final disappointing season of Game of Thrones.

Now to some substance, no wait, it’s more shouting. Debate organisers have been asked to install a mute button on Trump ahead of the next debate.

Relief for Biden’s team as 10 minutes into the debate he forms first coherent sentence.

Now onto the topic of ‘The Integrity of the Election’, Biden states anyone saying they won’t honour an election result is a dictator in sheep’s clothing while Trump again highlights how rigged the election is by stating ‘they even let black people vote, can you believe that?’

On the topic of ‘Violence and Race in our Cities’ Trump wins big with a promise to have more violence, less races in cities. Running on a ‘Lawlessness and Disorder’ message he now looks directly down the camera to tell white suburban housewives they’ve already been killed by a horde of murderous minorities.

Asked about climate change Trump promises to spray the entirety of the Earth in bleach.

Trump claims he sadly can’t release his tax returns which would easily prove his claim that he ‘paid millions in income tax’ instead of just $750 because Melania ate them.

As the debate draws to a close Trump visibly reluctant to leave the stage, as he sees the loan sharks he owes over $421 million to waiting in the wings.

Some voters will note Biden not giving a particularly strong performance, but on the other hand Trump is a raving lunatic heavily implying he wants his supporters to take to the streets with guns if he doesn’t win election.

Speaking for the majority of the civilised world Biden is heard at one pointing telling Trump ‘will you just shut up, man?’

On the subject of ‘Covid-19’ now. Standing by his record Trump says “I said it would disappear by April of this year and I was right”.

Citing a truly shocking stat Biden says “1 in 1,000 African Americans has been killed by Coronavirus”. A surprised Trump can’t believe Biden would frame his Covid response in such a positive way for his core supporters.

Trump bats back Biden’s point about the tragedy of 200,000 Covid deaths with trademark quick response of “those stupid losers deserved to die”. Live polling suggests this point is depressingly popular with Trump’s supporters.

Any voters undecided on who they will vote for have been asked to present themselves to their nearest sanatorium.