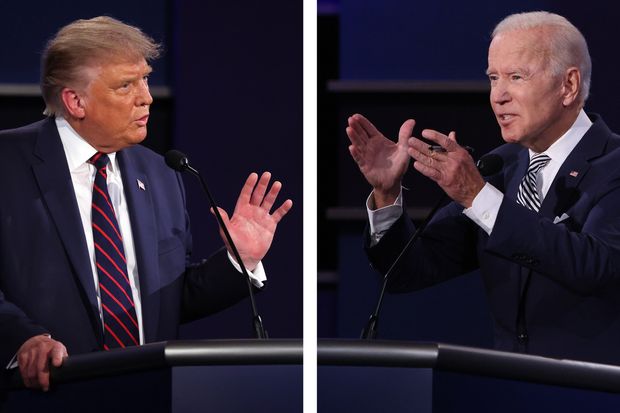 REPORTING that they were experiencing the same loud ringing sound in their ears after sitting through all 90 minutes of the first 2020 Presidential Shouting Match, the American public have been unequivocally declared the real losers in all this.

The very boring, run of the mill debate saw president Donald Trump instruct white supremacists to be on ‘stand by’, in what was one of many instances which were in no way a cause for grave concern for the American people.

“Quick, give me some aspirin,” confirmed a headache ravished population that remain unable to recall if anything of substance was actually said in between Trump’s incessant badgering, subtle incitement to violence and dog whistling.

Biden full of anemic tutting throughout was largely unable to place himself on the front foot, landing only one telling blow by doing something that internet comment sections have been doing for over 5 years; calling Trump a ‘clown’.

“God, did you hear both of them? What a dumpster fire,” shared another after watching 90 minutes of Trump interrupting, lying, and interrupting some more.

“Is this the best we can come up with? Is this how poisoned and pathetic the political discourse has become?” queried one elderly voter, who at 32 was old enough to remember the ancient times of pre-2016 when standards and expectations were a little higher.

Early post-debate polling suggest voters would pick ‘meteor destroying earth’ over another evening like this.

Some hours after the debate finished, officials used a crowbar and chisel to remove a still shouting Trump from his podium on the stage but not before Trump had the chance to douse the stage in fuel and light a match.

“Hey, maybe it’ll be better in two weeks time,” reasoned the American people, suffering the most chronic case of Stockholm Syndrome ever recorded.

In a bid to find a reprieve from the car crash debate, Americans found welcome distractions in the form of ongoing wildfires, a pandemic and economic ruination.