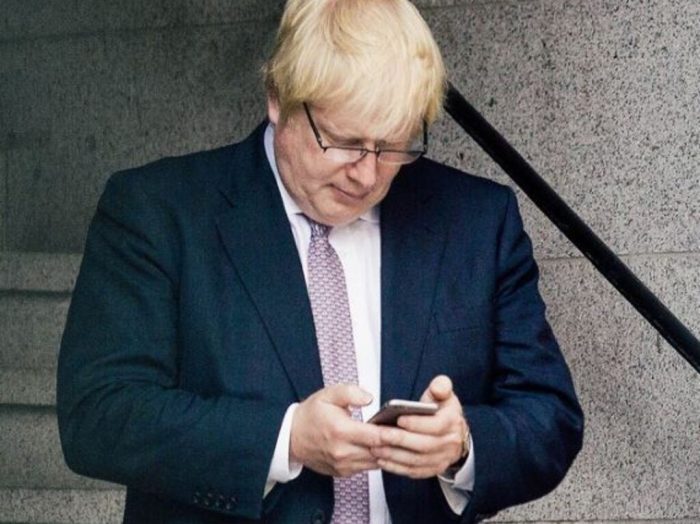 BRITISH PM Boris Johnson has reportedly been staring blankly at his phone for hours, unable to summon forth the delicately phrased words needed to let Northern Ireland down gently while at the same time never giving it reason to think he’s shafting them.

Johnson’s hope is to occupy a place in Northern Ireland’s mind as a fondly thought of ex, whose true bastard nature never quite dawns on it, a hope labeled by the Tory leader’s inner circle as an impossible goal.

“Sugar plumbs, it’s not you, it’s me,” Johnson wrote out in a WhatsApp text before deleting it quickly in a panic, unaware the DUP was at the same time flicking through its own phone and staring lovingly at a series of photos of Johnson with a Union Jack, Johnson in Belfast, Johnson passive aggressively undermining Northern Ireland in fronts of its friends.

“Boris is hoping to let Northern Ireland down so gently that years later, Northern Ireland is still defending its toxic, abasing, no-good ex to friends any time he comes up in conversation. Poor Boris, he says N.I is so insecure and needs constant reassurance, it’s a drain on him,” confirmed one aide.

Despite close friends trying to do the ‘decent thing’ in recent years by heavily insinuating that Northern Ireland could do better and doesn’t have to take such shoddy treatment, Johnson’s desire to treat the landmass like one of his children and deny its existence entirely will come as a shock to Northern Ireland when the inevitable happens.

“Sadly, I think Northern Ireland is going to be that person, who after being plainly told ‘it’s over’ will delude itself into thinking he’ll change his mind and they’ll get back together,” confirmed another aide.

Johnson, still struggling to find the sufficient words for a break up text, sent a series of unanswered eggplant emojis to America.