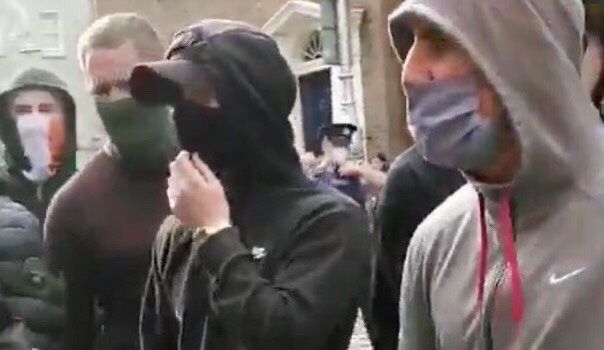 DESPITE refusing to wear a mask in shops, restaurants, hospitals, public transport, basically anywhere that insists on it, Simon O’Bawlin ignored all government advice against the spread of Covid-19 among his country’s most vulnerable people for the past three months before finally donning a freshly made tricolour mask to attend an anti-mask rally.

“Pedo scum off our streets,” Bawlin shouted, making sure to cover as much of his face as possible, pulling the peak of his Taiwanese-made baseball hat over the bridge of his nose. “Pedo scum off our streets,” he shouted at opposing protesters, intoxicated with the kind of built up rage only seen passed down from generations of hard-done-bys, desperate to feel some self-worth and place in society while wishing revenge on somebody, anybody who gets in his way.

Citing years of recommended content on YouTube, Simon O’Bawlin gripped his large long wooden dowel, conveniently wrapped in what appeared to be an Ivory Coast tricoloured flag, a mirror of Irish unity and blatant irony.

Surrounded by like-minded self-proclaimed warriors who terrify themselves from overindulging in alt-right manipulated news feeds, Ireland’s brave patriots continued their tirade down the street calling for restrictions to be lifted and masks abolished, all while still wearing a mask, albeit for the purpose of anonymity.

“Ireland for the Irish,” the brave masked patriots shouted, now waving the national flags like weapons in an imagined battle concocted by wealthy people feeding them this message and watching on from afar while commenting online.

“Great work, guys, well done,” masked profile egg pictures tweeted, failing to reveal themselves, before reiterating their unified message, “free speech for all those who agree with us – only our speech can be free”.