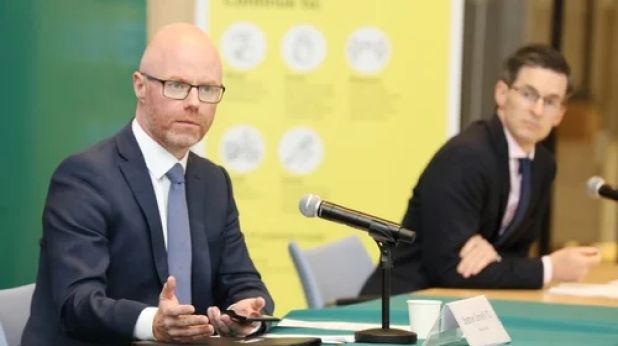 MINISTER For Health Stephen Donnelly was said to be ecstatic this morning at the fact that he was the number one trend on Twitter in Ireland all night, a sure sign that he’s doing a great job with his ministerial brief and everything is ‘coming up Donnelly’.

“Trending all night, even with the big storm; that’s gotta be something!” beamed Donnelly, strut-walking down the street all delighted with life.

“I don’t know what that Harris lad was giving out about all this time, this Health Ministry shit ain’t all that”.

Donnelly, buoyed by what he considers his ‘Princes Diana and Martin Bashir’ interview with Virgin Media’s Zara King, triumphantly strode into his office today where he was greeted by a number of weeping staff clearing their desks.

“Anyone see me on the TV last night? That reporter tried to stump me a few times with some tricky questions like ‘how are our kids going to be safe when they go back to school’; boy, did I ever have the right answer for her. I was all like ‘hey lady, kids aren’t safe anywhere! Cars, trampolines, nowhere!’. That shut her up. Did you see? She was speechless for nearly a whole minute”.

The minister was interrupted by an urgent Zoom call from Taoiseach Micheál Martin, which he took straight away.

“Stephen, I caught you interview last night” said Martin. “And I just wanted to say I loved it! Well done kid, you’re really nailing it these days!”.

“Just doing my job” assured Donnelly, feet on the desk, sunglasses on, curious as to what that mob-like sound from outside his window might be.