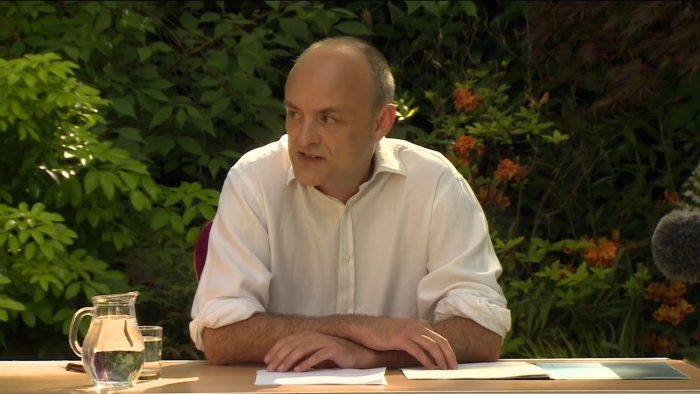 “PERSONALLY, I have never been more ashamed of the conduct of the British public, it’s disgusting; the idea that I answer to any of you,” Boris Johnson’s owner, Dominic Cummings, confirmed during an emergency unimpressed conference, before adding that he expects an apology on his desk from the public by close of business today.

“I’ve already set up my ‘fucked off to Durham for a few days again’ out of office email, but fucking send it by 5pm anyway you pack of unreasonable twats,” barked Cummings, now resembling an angry Peperami come to life.

A regrettable, immediate fallout from the address is that opticians have now gone out of business thanks to Cummings revealing simple eye tests can be carried out while driving to castles, provided your wife and child are in the car at the same time.

A highly anticipated media address, 3.7 million people tuned into the BBC to watch Cummings repeatedly call the public stupid bloody idiots to their faces for thinking he repeatedly broke the rules he definitely broke, repeatedly.

“Look, what’s your problem? It’s all pretty straight forward – I didn’t drive to Barnard Castle but actually I did, and I did it because I couldn’t see, so I drove there to see if I could see, see?” concluded Cummings, who was pleased with how well explaining why people who adhered to the rules, even when loved ones were dying, were idiots.

Those watching the address at home were dismayed by the radioactive arrogance Cummings was transmitting from every pore.

“Fuck me that was bad, awful, he’s only made things worse,” confirmed one TV viewer and expert in making things worse for himself, Prince Andrew.

Cummings also refused to apologise for throwing that homeless man into the Thames, blaring Gary Glitter on his car radio, putting empty milk cartons back into the fridge and the speedy disintegration of the United Kingdom.