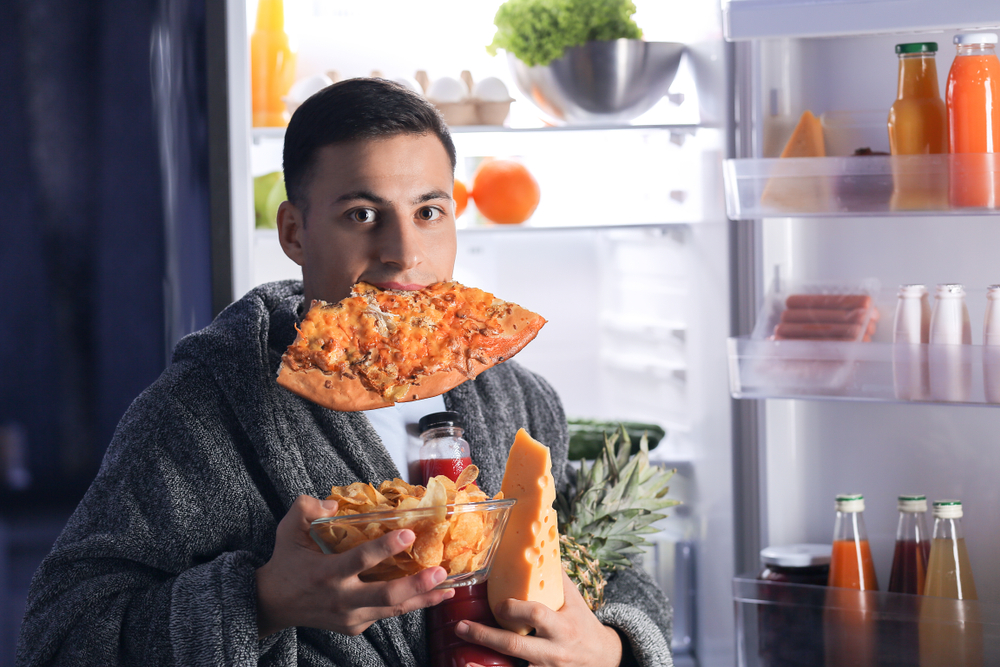 ACCORDING to the pile of letters amassing in the hallway of the modest nondescript apartment, this abode was once home to one John D’Arcy.

However, according to the slouching mass of flesh engaged in what looks like an illegal sexual act with a fridge, there is no John here anymore, only ‘Snack Monster’.

In scenes probably echoed throughout kitchens across the world, the strain of being caged at home 24/7 with close proximity to ‘all of the carbs’, the human being once known as ‘John’ has made the transformation to a monosyllabic garbage bin that is never satisfied no matter what the levels of his food consumption are.

“Snack Monster have this now…? Okay?” queried Snack Monster as its doe eyes looked to John D’Arcy’s partner Rachel Crossan, seemingly seeking permission to eat the tub of Ben & Jerry’s Cookie Dough the monster was already half way through anyway.

“Me no know John, me fridge best friend,” added the Snack Monster going to town on last night’s takeaway leftovers.

Rachel, beleaguered partner to John, doesn’t know when this all started and when exactly Snack Monster emerged.

“It’s sort of a Bruce Banner/Hulk situation. John ‘smash’ the fridge now every day. Before the lockdown, John would lose his mind if he had too many carbs and feel the urge to fire off 100 push ups just to counterbalance a few chips – he was very strict with himself,” explained Rachel.

“But Snack Monster, well, he tends to eat everything and then deny eating my half of the popcorn, the cheese, the biscuits, the everything really,” added Rachel left fishing around the empty fridge for a stray salad leaf after failing to wrestle a handful of Doritos from Snack Monster’s claws.