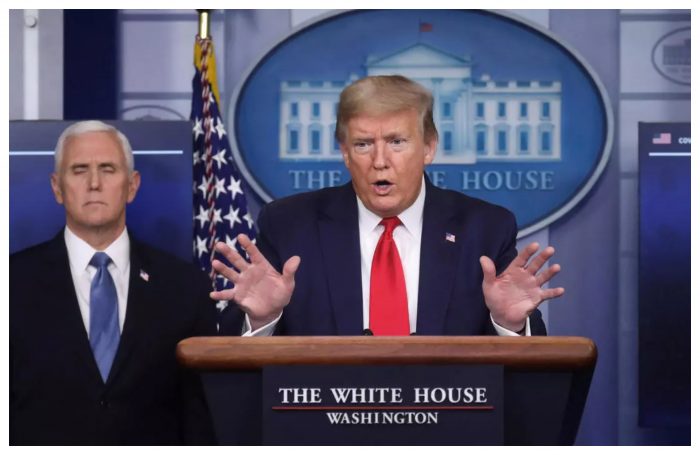 MATHEMATICIANS working for the Republican party have been given 24 hours to come up with a formula that will ensure the re-election of President Donald Trump is a ‘mathematical certainty’, based on projected Coronavirus deaths in key areas.

The study kicked into gear after Trump ‘took a moment’ to think about a throwaway comment from Mike Pence, after the VP casually remarked that ‘dead people don’t vote’.

As such, Trump has demanded a ‘formula’ for successful re-election, with a second memo from the Oval Office stressing that he wants it ‘nice and easy to understand’.

“You take a traditionally Red state, find the number of voting-age citizens, calculate their risk of contracting Covid-19 and their subsequent risk of dying from it, and express that as a percentage of what you need to clinch victory at the polls, adjusting for how forgiving they might be if ten people they know died from it” said one of the statisticians at a Make America Great Again, Again meeting.

“And then you flip that process for Blue states. We’re looking for a nice balance across the country of very forgiving, right-leaning 18+ voters who are likely to be, y’know, alive in November. Then we’ll get to work making sure they stay that way. If our formula shows that Coronavirus is going to decimate the elderly in a Republican stronghold, then you can rest assured we’ll maintain lockdown and keep those grey dears alive. If it’s going to run rampant in minority neighbourhoods in a mostly Democrat voting area, we’ll ease up on restrictions”.

Trump has added that if these calculations mean that his opponent Joe Biden also contracts Coronavirus, that’s ‘a nice bonus’.