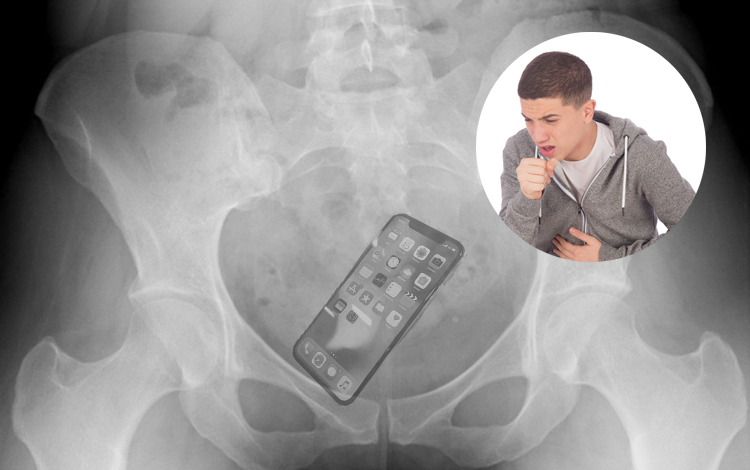 THE extraction of an iPhone X from deep within the rectum of a Waterford teenager who had been using it to film himself purposefully coughing on passers-by has been hailed as a ‘miracle’ by the nation, who simply cannot believe that anyone would go to the trouble of trying to remove it.

Derek Lears, 17, had spent the day with a group of his friends at a Waterford housing estate coughing and sneezing on people while uploading the videos to Tiktok, when he picked on the wrong person and swiftly ended up as a fleshy cover for his own mobile phone.

This brings to 250 the number of Waterford youths who have received mild-to-serious kickings for exploiting and belittling people in the middle of the Coronavirus scare, with officials stressing that ‘this is the calm before the storm’ when it comes to messers getting what’s coming to them.

“A lot of young people are ignoring advice to stay inside; that’s one thing. But this updated ‘happy-slapping’ shit is quite another, and we’re giving 100% permission to anyone who sees this going on to kick the absolute fuck out of these little pricks,” said a spokesperson for An Garda Síochána, who have enough to be doing.

“The kind doctors in Waterford General agreed to surgically remove Mr. Lear’s phone, solely so they could ring his parents and let them know what a terrible job they’ve done raising him and that they should be ashamed of themselves,” adding, “personally, I would have left it up in him and rang his number until he cooked, but these things aren’t up to me”.

Meanwhile, doctors have warned that they’re ‘way too busy’ to deal with any youths who get stomped on for purposefully coughing on people, and should they be admitted to A&E after a kicking, they’d ‘better bring a nice big book or something’.