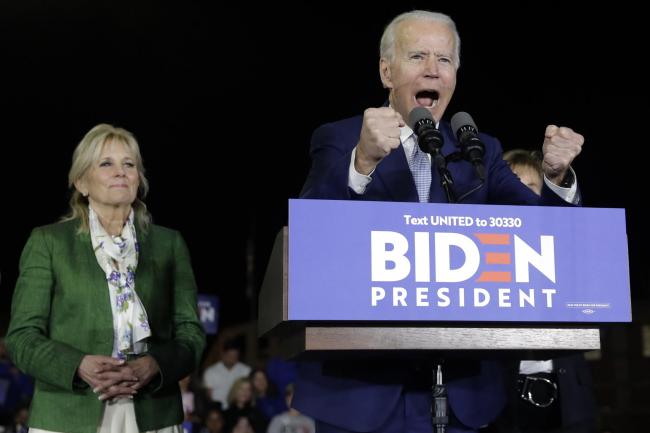 RAISING A TRIUMPHANT fist in the air to loud cheers from supporters following his victorious sweep of ‘Super Tuesday’, former vice-president Joe Biden said he was humbled by the Democratic party members’ faith in his ability to “lose comprehensively in a depressingly predictable manner to Donald Trump in the November 2020 Presidential Election”.

A roaring comeback sees Biden overhaul his Democrat rival Bernie Sanders’ number of delegates, placing Biden in prime position to be the man with the honour of forlornly placing a phone call on November 3rd to concede to President Donald Trump.

With Biden’s fresh surge making him the favourite for the Democratic nomination, American voters are preparing themselves for an election campaign which will resemble a family dinner featuring their two severely senile grandfathers never failing to refer to minorities with the most outdated terms possible.

“Joe is the best least worst awful option for this great and storied political party. And when you consider who, among Democrats, has it in them; who has the integrity, the civility and the courage to lose to Trump and break our breaks all over again, it’s Joe all the way” remarked one voter.

However, one election bright spot comes in the form of the continued spread of Covid-19, which could see an eventual end to close formal person-to-person contact such a shaking hands and hugging, benefiting all female voters who come within groping distance of Trump and to a lesser extent Biden.

Elsewhere, staunch supporters of the pro-union, healthcare-for-all Democratic socialist candidate Sanders, who are claiming the latest primary results have been ‘rigged’ have been told ‘nope, this sounds eerily like the American voting public all right’.