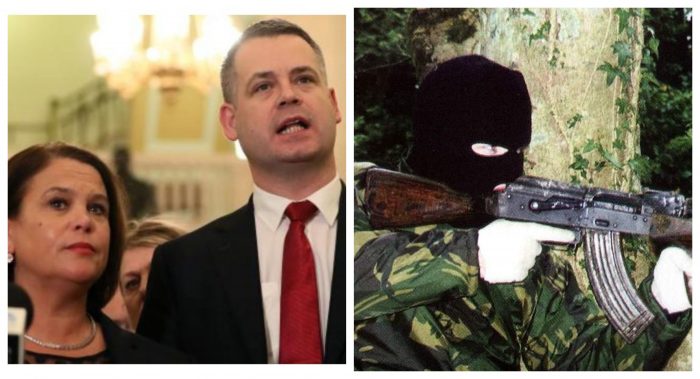 AS A COUNTRY we may not be able to get our complex, nuanced and violent past out of our system, but that’s not to say we can’t all band together and agree to get one big ‘Sinn Féin is the IRA’ bashing session out of the way and then move on, allowing a more mature, forward-looking evolution of criticisms of Sinn Féin to begin.

Once all the bad, lazy, middling and meta jokes, which are as subtle as a bullet to the kneecap, are out of the way, Sinn Féin can be judged merely for being like any other political party and can be called out over leprechaun economics, corruption, craven back room deals, and vote-grabbing election promises like Fianna Fáil and Fine Gael in their former hey day, or Sinn Féin in the North.

Thanks to all our readers who sent in these entries. Sit down, strap in, and depending on your party affiliations laugh like a wheezing donkey, cry, or tut dismissively and cringe, do your part to move the nation’s politics forwards:

The election is basically a draw so does that mean it’ll go to penalties? ‘Cus Sinn Féin would win the shootout.

As long as there’s JCBs and ATMs in Ireland, Sinn Féin should be able to pay for everything.

I hear Sinn Féin will implement a rental kneecap the first day they enter office.

A Sinn Féin government would bring a whole new meaning to boom and bust cycles.

Did ya hear the new names for government departments under a Sinn Féin government: Dept. of AgRAculture, Dept. of Safe Houses, Dept. of the Environment and Fuel Laundering, Dept of Social Protection & Intimidation.

If Sinn Féin don’t get to form a government, I hear they’re taking a legal challenge all the way to the Supreme Kangaroo Court.

If anyone can defuse the ticking pension timebomb, it’s a Shinner.

The banks may have lost €300 million in value since the election, but shares in Semtex have exploded.

If McDonald is made Taoiseach before a government is formed, does that make her the Provisional Taoiseach.

The last time banks lost that much money in one day they were being robbed by the IRA.

The IRA is so vast, just witnessing the organisation in action will make you go weak at the knees.

“Should we all be in the IRA now father?” (accompanied by relevant Father Ted clip. Plus a thousand more variations on this meme.)

You can’t spell Rent Allowance without the IRA.

All public addresses by the Irish government will now take place in Belfast in a spare room of a house with dodgy 1970s decor, in front of a tricolour pinned up by thumbtacks on the wall.

Under Sinn Féin the Angelus will be replaced by Come Out Ye Black and Tans, pubs will only serve pints of McGuinness and everyone will have to dress as Che Guevara.

“We now go live to Sinn Féin coalition talks with Fianna Fáil” (accompanied by a picture of lads in balaclavas beating the shite out of some poor fella).

Under new legislation the responsibility for the cover up of child abuse will be taken away from the Catholic Church and given to the IRA.

“Gerry Adams! Him and his big teeth he got in America for free! The RA! Sinn Féin! Bombs! Sorry… I’m not good at this joke stuff” – another reader submission, sent in by Leo in Dublin.

Under Sinn Féin the Department of Tourism will ensure every beach will be renamed Bobby Sands and Leinster House will be painted over with a huge Free Derry mural.

Revolutionising public transport, Sinn Féin will ensure a five minute warning is issued before they blow up a bus. A ‘sniper at work sign’ will appear at all traffic lights to deter motorists from breaking red lights, and a ‘provisional license’ what mean what it used to mean.

This is the first time the Dáil will have more terrorists in it than primary school teachers who take the absolute piss.

Jesus Sinn Féin didn’t do too bad, some might say it was an explosive election result for them.

Sinn Féin defence policy unveiled: for every guard a dissident murders, Sinn Féin have pledged to recruit a further 10.

Now we as a people can put our energy towards focusing on Sinn Féin’s policies. More like ‘Sin’ Féin, amiright? Huh? Get it? We’ll get our collective coats.