LAST NIGHT’S leaders tonight proved the most illuminating of all the televised debates as the leaders of Sinn Féin, Fianna Fáil and Fine Gael went head to head. Relive the tense exchanges as they happened below:

In tonight’s debate the leaders will be tasked with insulting the public’s intelligence on matters of housing, health and the economy, among other things.

Press the red button on your remote now and click ‘subtitles’ if you’re not fluent in the ‘bullshitting politician’ dialect. Looking to watch the debate on the go? Switch over to the RTÉ Player to watch it in glorious chunks of 5 or 6 pixels before being forced to watch 9 ads for the new Audi.

Remember, over on the RTÉ player, Fine Gael voters can press ‘balaclava mode’ for McDonald: 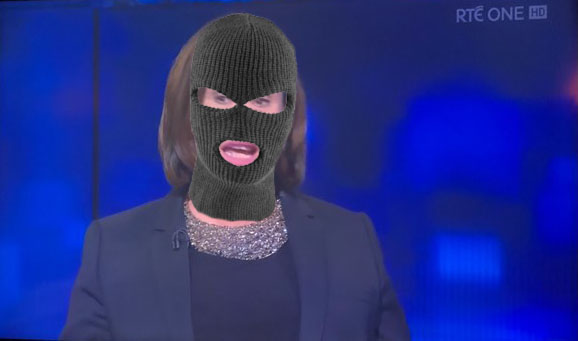 And we’re off: Sinn Féin’s Mary Lou McDonald being tested on Sinn Féin’s Conor Murphy’s shameful comments about the victim of a brutal killing at the hands of a Republican gang in 2007.

“Ah fuck, Miriam, really? Straight out the gate with this IRA shit?” responds McDonald, before flubbing a non-apology apology for 5 minutes.

Not letting the opportunity slide, Fianna Fáil’s Micheál Martin bemoaning the fact some young people eligible to vote have no memory of the Troubles but also relieved they were too young to see FF gut the country.

Fine Gael’s Varadkar now pushing Fine Gael’s progressive credentials “remember, we are the party that tried to take full credit for everyone else’s hard work on the Marriage and Abortion referendums”.

A public health warning has been issued by RTÉ advising anyone playing a debate drinking game to refrain from drinking when leaders mention ‘change’ as they’ll be dead within 2 minutes from alcohol poisoning.

First ad break. Stay tuned during the break for some of the best election debate halftime commercials of all time. Nathan Carter is going to sell actual wagon wheels!

McDonald says ‘as long as there’s JCBs and ATMs on the island there will be money for hospital beds’.

“Like I give a fuck, clearly,” says Varadkar. This is a more confident performance from the Taoiseach, playing to his core demographic of voters that hate the poor.

No, you don’t need your hearing checked; this is the 77th political debate this election campaign which doesn’t see the point in talking about mental health funding & reforms.

The Maths round; the three leaders, calculators in hand, are scribbling furiously now after O’Callaghan asks them where exactly they plan on getting the money for all their election promises.

Martin straight back in with “sure didn’t Delaney get us to two European Championships – two piss ups, one in Poland, one in France”. Crowds outside now heard chanting Ole Ole Ole, Fianna Fáil gaining big votes off this surely.

McDonald addresses big concerns about Sinn Féin economic plans “ah, sure aren’t we all just talking out of our holes for a few votes”. Varadkar and Martin nod in agreement.

On whether the public can trust them:

“You can trust Fine Gael to grind down what’s left of working people’s resolve until there’s only tears left. But look, I tell like it is – The Irishman was way too fucking long” – Varadkar forthright as ever.

Suffering fatigue after a strong showing – Varadkar now visibly making the ‘substitution’ gesture seen in football, with Simon Coveney just finishing up his stretches, ready to take his place as soon as the ball goes out of play.

This is a nice addition to the debate format: Happy 205 billion euros! Interesting move by RTÉ to bring in a massive cake celebrating Ireland’s national debt. Leaders now fighting over who blows out the candles.

Coming up after the break; more promises, deflection and fuck all action.

Large spike being reported in Irish Google searches for the word ‘pension’.

Pitching to the nation her ability to represent all communities in the event of Irish unity, McDonald confirms “yeah, even those Unionist bastards”.

In the closer stages now:

Now the leaders are talking on Climate Action:

“I believe in climate action, the tooth fairy, Santa Claus, and all those things… ” Varadkar denying that Fine Gael is lax on climate.

“We’ll have to have a little word with the climate, if you know what I mean” McDonald says.

Closing, remarks RTÉ ask what the leaders’ ‘biggest mistake’ has been:

Voting machine lands on Martin as he’s asked what’s his biggest mistake was.

“Not growing a beard” – McDonald reveals her biggest mistake

“Endorsing Verona Murphy after she made comments about refugee children being in ISIS, no wait homelessness, no, no; health, wait-” concedes Varadkar whose mic is cut as he continues for 12 more minutes.

There you have it, it’s all over. Immediate exit polls have asked audiences watching which of the three leaders they would be likely to vote for. However, there seems to be some issue with the polls as the official response has been recorded as ‘defeating crying and hopelessness’.