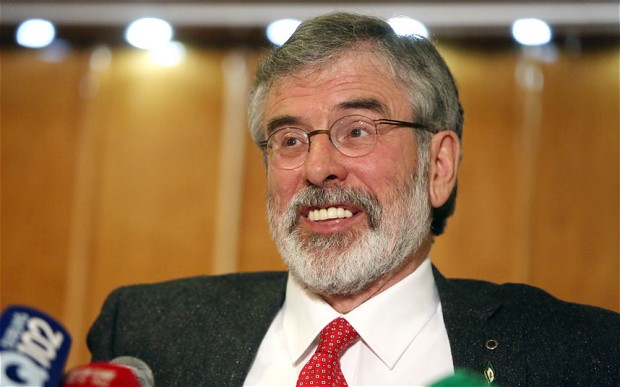 VISIBLY sweating and relentlessly pulling on their shirt collars in an apparent attempt to breath more freely, Fine Gael and Fianna Fáil leaders Leo Varadkar and Micheál Martin have appealed to Sinn Féin to bring back Gerry Adams as leader after catching sight of their rival’s upward trajectory in the polls.

Fondly recalling the days when the average voter couldn’t for a second consider ever voting for a party with a was-he-in-the-IRA-or-not-did-he-order-killings-that-sort-of-thing figure as a leader, the leaders of Ireland two biggest parties in decline asked Sinn Féin once more to consider putting Adams out in front for everyone to see and be revulsed by.

“C’mon we all miss Gerry don’t we? What do you say? Bring him back for the last week?” Varadkar and Martin pleaded, constantly averting their eyes from the latest polls, “IRA connections, claims of facilitating IRA kangaroo courts on sexual abuse, the Disappeared, having the worst memory in history, what’s not to like?”

The leaders lamented the fact that without Adams in charge, calling Sinn Féin’s tax policies a ‘time bomb’ doesn’t have the same ‘oomph’ and ‘negative brand association’ with Mary Lou McDonald.

“People seemed a lot less keen to vote for a party that wants to tax everything and everyone when old Gerry was in charge. You could use zingers like ‘you can’t spell IRA without Gerry Adams’. Or ‘hey, have you seen the length of this lad’s ‘dodgy shit’ section on Wikipedia? It’s longer than fucking Ulysses.”

In an effort to help the panicking leaders find alternative ways to combat the rise of rival parties, some political experts have asked Varadkar and Martin if they had considered trying to become competent leaders.