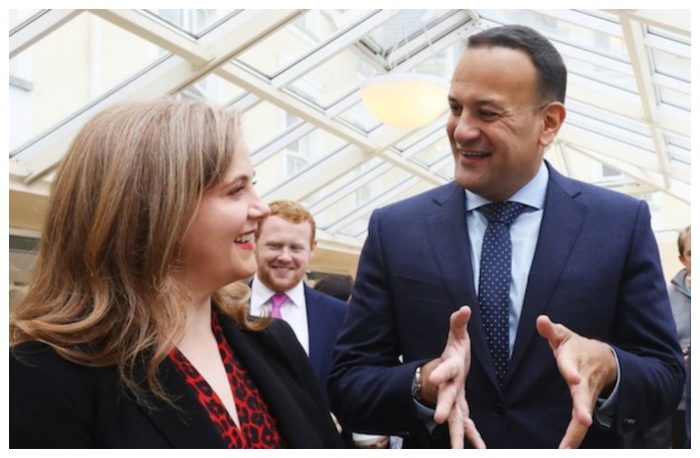 OH DEAR! Fine Gael senator Catherine Noone landed herself in hot water this week, after describing the Taoiseach as ‘a bit autistic’, and then explaining herself by stating that there were much worse things that he could be called, literally dropping the n-word in the process.

With criticism flowing in from pretty much everyone not associated with the FG election campaign, many are asking why the senator chose to use ‘autistic’ as a derogatory term for Varadkar, not least because there’s so, so many other things that you could call him… things such as:

Varadkar’s stand-offish nature and routine-focused behaviour didn’t have to be labelled ‘autistic’, when you could just have easily called him a fitness freak and attributed his failings to his obsession with running and keeping active.

Used in a sentence: “Leo ran past nineteen homeless people who are living on the streets as a direct result of his failings as a leader while on a 10k run this morning… he’s such a fitness freak!”.

Leo’s love of colourful socks has become a bit of a go-to slagging subject so it’s amazing that Senator Noone went straight to the n-word when she could have simply pointed to Leo’s sock fetish instead.

Used in a sentence: “Leo is pure sock-mad, loves his socks. In fact, you could almost say he loves socks as much as he loves blaming his government’s failings on the actions of Fianna Fáil in the last government, even though that’s 10 years ago and Fine Gael have had plenty of time to set things right”.

Although Senator Noone is unlikely to just drop an FTC in the middle of a discussion about the Taoiseach, her boss, it probably would have raised fewer eyebrows than calling him autistic. Fewer people would argue, certainly.

Used in a sentence: “I’m not saying Varadkar is a fucking Tory cunt, but a lot of his actions seem to suggest a disdain for the working class and a desire to cosy up to the higher-ups in our society, buying their votes with promises of tax cuts and stricter controls on social welfare, painting an image of a two-tier society where the people with the least are the cause of all the problems faced by the people with a little, as dictated by the people with a lot. So yeah… bit of a fucking Tory cunt, in fairness”.

Already used by Sinn Féin councillor Paddy ‘The Hooligan’ Holohan, describing Varadkar as ‘not a family man’ is the perfect way to get a dig at the fact that Leo doesn’t have any kids and therefore is out of touch with the stresses of families trying to make ends meet, while sewing in some not-so-subtle homophobia in there too. Of course, if Noone had dropped this one, she would have most certainly been hounded out of politics like Holohan rightfully was, but instead she just labelled Varadkar as ‘autistic’ so she got off with a smile and a ‘that’s Catherine!’ from her peers.

Let’s not over-complicate things; Fine Gael members have been called Blueshirts for so long, it’s a wonder why their behaviour is labelled as anything else! Why go to such ends to reason with who Varadkar is and what he does, tongue-tying yourself into circles trying to convince a journalist that you didn’t call him autistic even though it’s on tape, when you could have just described his behaviour as textbook Blueshirt-ism and left it at that? Half the country don’t really know what it means, and the other half don’t seem to care, according to polls.

Used in a sentence: “I know a lot of people who don’t like Varadkar’s politics, but come on. This is typical Blueshirt behaviour, you know what you’re getting if you vote for them. But what’s your options? Vote FF? Vote for some other no-mark party? Come on now, be serious”.