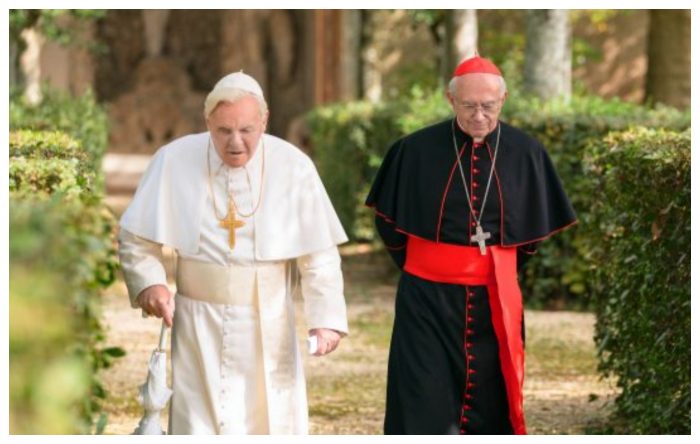 WITH hundreds of viewers and two Academy Awards nominations in the bag, it seems people can’t get enough of Netflix’s “The Two Popes” and well, they’re in luck, because the streaming service has just OK’d a sequel provisionally titled ‘The Two Popes: Pope Harder’.

Detailing the story of the transition of Popeness from Pope Benedict to Pope Francis in 2013, The Two Popes was a hit over Christmas thanks to star turns from Anthony Hopkins and Johnathan Pryce, and also aided by the fact that Harry Potter wasn’t on TV that much.

With Netflix chiefs eager to press ahead with the sequel, ‘2Popes2Hard’ is set to head into production as early as next month; and we’ve had a sneak peak at the script.

“The tagline reads ‘with a new child sex abuse case set to take down the Vatican once and for all, Frank and Ben have to team up one last time to blame it all on the influence of the media'” said our source in Netflix.

“On top of that, you have Benedict’s rapidly failing health, which has been getting worse for nearly 8 years now, but not, y’know, bad enough to kill him. You’ve got Francis, whose hot temper has started to get him in trouble with the press. And then you’ve got a world full of starving people, wondering why God has forsaken them, and why the Pope needs to sit on an actual gold throne while so many go hungry. All in all, you’ve got one hell of a blockbuster, with twists and turns throughout!”

‘Another Two Popes’ is due to hit Netflix in December, so that’s your Mam sorted for something to watch over Christmas.