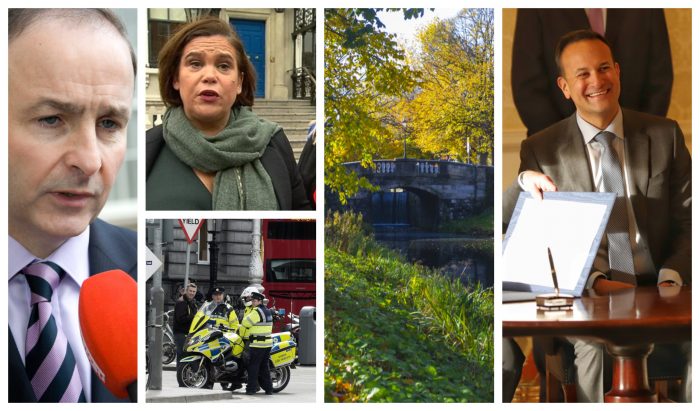 THROUGHOUT the 2020 general election campaign WWN’s vast team of roving reporters will bring all you the latest from around the country as politicians try to sell their uninspired and poorly thought out short-term vision for Ireland:

Unveiling their ‘A Future To Look Forward To’ slogan Fine Gael outlined their intention to focus on Ireland’s bright future and Taoiseach Leo Varadkar did just that by talking about all bad things Fianna Fáil have done in the past.

School students have labeled Irish’s politics a ‘fucking joke’ after realising having the election on a Saturday the will rob them of the day off.

Several candidates’ fingers have already been broken or dislocated as finger-pointing between the main parties became intense.

Looking to get the party’s campaign off to a good start today the Taoiseach went before the media’s cameras keen to show his sociopathic indifference to the news a homeless man received life changing injuries after Dublin City Council workers removed his tent from Wilton Terrace with a JCB while the man was still in it.

In a huge boost to the cause of solving homelessness Eoghan Murphy agreed to remove his election poster from the scene.

The mudslinging has already begun with Sinn Féin accusing Leo Varadkar of secretly being the Monopoly man and a Fine Gael election leaflet being circulated has accused Sinn Féin voters of being dribbling hunchbacks with cemtex for hands.

Fianna Fáil got off to a sluggish start as Micheál Martin attended hospital, receiving a booster shot and a truck load of supplements in a bid to combat a chronic case of charisma deficiency.

The Green Party, after a successful rewilding process at a local marshland, unveiled one of their new candidates; Swamp Thing. The party have confirmed they will create a Minister for Bees if voted into power.

The Labour Party have been pictured in the background, frantically waving their hands in a bid to alert people to the fact they exist.

Opposition parties have already entered into arguments over who has the largest number of magic money trees.

Vowing it’s a case of “New Year, new me” large sections of the Irish public are vowing to try out a FG/FF detox diet ahead of the election.

One big issue all parties have agreed to avoid is the ticking time bomb of over 50% of the nation’s corporation tax coming from just a handful of multi-nationals who could up and leave at any moment, plunging Ireland into economic chaos.

Meanwhile on Twitter one courageous man has vowed to tweet endlessly about the election in a bid to convince his friends who the same views as him to vote the way they were already going to vote anyway.

The Irish media, having learned from the mistakes of the coverage of other elections by their publishing peers abroad, have confirmed that candidates espousing far right anti-immigrant views will be punished with increased media coverage and free publicity.

A number of notable TDs have announced they will not be contesting the general election and they include Sinn Féin’s John O’Brien, Labour’s Brendan Ryan and independents John Halligan, Mattie McGrath, your man from down the road, Brian Carty’s uncle ah you do know him, Big Bird and a one-bed Dublin apartment worth €750,000.